The Ferrari 288 GTO. Quite simply one of the finest – and most beautiful – supercars ever created 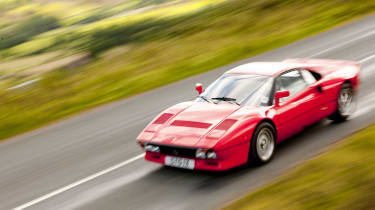 Strange, this. Wasn’t the GTO just a 308 (very pretty, admittedly) with a few extra curves and slats? In part, yes. And the twin-turbo V8 that would go on to become the heart of the F40, of course. But there was something about the 1984 GTO that seems to transcend even this. It was just so devastatingly good looking – right up there with the Lamborghini Miura in the all-time drool parade.

Serious kit, too, with a composite body and longitudinal rather than transverse drivetrain. And what an engine. Saddled up with a brace of IHI turbos, the 2.8-litre V8 developed a phenomenal 400bhp (or 140bhp/litre) – enough, before the Porsche 959 came along, to make the 189mph GTO the fastest production car in the world. Not as hardcore as the subsequent F40 but none the worse for that; indeed many rate it as the better all-round steer (and it’s much rarer too).

Short for Gran Turismo Omologato (‘omologato’ being Italian for ‘homologated’), the three letters had appeared on a Ferrari once before, on a model considered by many to be one of the greatest Ferraris of all time: the  250 GTO. The new GTO clearly had a  lot to live up to.

Crucially, unlike the 308, the GTO wasn’t a semi-monocoque design but instead had a separate body over a high-tensile tubular-steel chassis. For strength and lightness, the bulkhead and front bonnet were made from a Kevlar glassfibre honeycomb composite, as  used on Ferrari’s F1 cars.

In ‘Evoluzione’ race-spec it could lay claim to 650bhp and, depending on gearing, a top speed of 225mph.

Rule changes meant the GTO never had a chance to prove itself in competition, but it didn’t need to. Its performance, rarity and beauty, perhaps with a little help from the three letters on its rear, meant iconic status was assured.