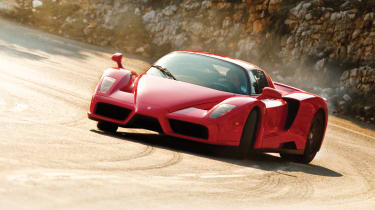 The car most were expecting to be called the F60 arrived in 2002 and used a body of questionable beauty to generate increasing amounts of downforce with speed. Its construction combined carbonfibre and aluminium honeycomb throughout. The 6.0-litre V12 sitting in the middle was an all-new design, there was a paddle-shift gearchange, and the Enzo was also an early adopter of carbon-ceramic brakes.

Maranello’s own description was ‘the closest you can get to the F1 experience in a road car’, which was at least a variation on its pitch for the F50. Naturally, this had more to do with the noise of the engine and the feel of the chassis than outright performance. Its naturally aspirated, 650bhp V12 screamed with the same nape-tingling intensity of the single seater’s, even if its red line was set at a comparatively modest 8500rpm.

Find a red, yellow or black Ferrari Enzo on evo Cars for Sale

It was enough to convince you that this was a far more serious attempt to recreate that Schumacher moment than even the F50. Everything, but everything, was designed to give the driver maximum input and gratification. The cabin was less spartan than the F50’s but even more purposeful. The seats provided rock-solid location, the big high-tech instruments a truly epic rev-counter.

On a road that would make a 911 work for its living at 100mph, the Enzo tackled it at least 30 per cent faster without breaking sweat, hitting absurd speeds on the shortest of straights. It might not have been quite as fast against the clock as a McLaren F1, but it was a lot more driveable. Anyone who climbed out of an Enzo and said it wasn’t fast enough was either a liar or Michael Schumacher.

As a generator of thrills, the Enzo was phenomenal – the greatest ever Ferrari flagship without a doubt. Indeed, the Enzo was – arguably still is – the most exciting car on the planet.