Ferrari returned to a front-engined layout for the 550 maranello. Good move... 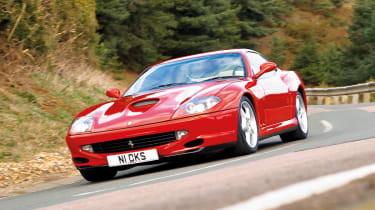 Rerrari clearly used the Daytona as a spiritual template for the 550 Maranello. Both had bodies styled by Pininfarina with long, thrusting bonnets and short, clenched tails. Both had naturally aspirated front-mounted V12s powering the rear wheels via transaxle transmissions for optimum weight distribution. Both had big, clear rev-counters with red lines that began well beyond 7000. And both were set in the classic GT mould: large, leggy two-seater coupes that can traverse countries in a single bound.

But although the concepts overlapped, the scale of Ferrari’s ambition had grown profoundly by the time it made the Maranello. Take the 550’s V12 engine. It had 5.5 litres, 48 valves, 485bhp and 415lb ft of torque, its gearbox has six speeds (and 26mph/1000rpm gearing in top). The Daytona was the swiftest car of its day, but it was a pigmy next to the Maranello, which was 25mph faster flat-out and three seconds quicker to 100mph. Add to that a superbly positive gearchange, an almost absurdly driftable chassis and classy ergonomics. It was even refined.

The 575 that followed was faster still, but it needed the Fiorano handling pack to recapture the 550’s brilliance. It might seem unsophisticated and lacking ultimate firepower compared with today’s F12, but the 550 Maranello remains a dynamic masterpiece nonetheless.

Back in 2004, evo ran a ‘Greatest Drivers’ Car’ showdown with the greatest cars from the previous ten years, including 911 GT3, Honda NSX-R and Zonda C12S. The 550 Maranello won. ‘As with all great cars, there’s no one facet that dominates the experience,’ we concluded. ‘Yes the engine is mighty, but the chassis is its equal. There’s never been a supercar that’s so exploitable and so rounded in its abilities.’