It may have been Faster than the 550, but the 575M took a while to find its feet 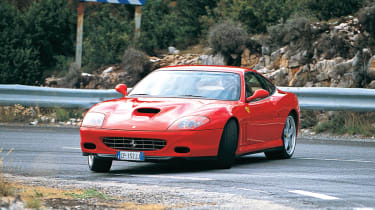 Larger bonnet intake, reshaped front spoiler, xenon headlights and new five-spoke alloys – it took a real Ferrari fanatic to spot the visual changes when 550 Maranello morphed into 575M in 2002. The changes under the skin were more significant, the V12 engine enlarged from 5.5 to 5.7 litres, power pumped up from 485 to 508bhp, 0-60 cut from 4.3 to 4.1sec, and the official top speed just nudging past the 200mph barrier. Biggest change of all was the option of Ferrari’s F1 paddle-shift transmission, which had first been seen on the 360 Modena F1.

The paddles seemed slightly out of keeping in a deep-lunged super-GT, the gearchanges not as smooth as they might be. No such misgivings about that magnificent V12 engine, which easily trumped the 550’s already mighty delivery. The chassis lacked tight body control on challenging roads, however, and overall the 575 was viewed as a less satisfying car than the 550. Ferrari itself seemed to acknowledge the criticism when it introduced the ‘Fiorano’ handling pack not long after the 575’s launch. With lower, tauter suspension and sharper steering, it recaptured the 550’s magic, with an extra layer of ferocity on top.

After driving a 575 Fiorano last year, evo’s tester said: ‘The way you can dictate to the chassis without every bullying it is just mesmerising. I’m bewitched…’

Find a Ferrari 575 for sale on evo Cars for Sale