Ferrari stuck with front-engined for its next supercar, and what an engine 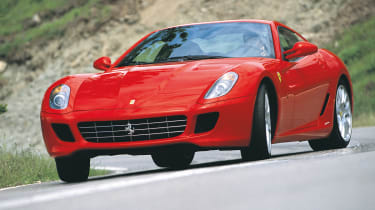 The V12 nestling well back in the long nose of the 599 GTB was derived from that of Ferrari’s greatest supercar, the Enzo. The naturally aspirated 6-litre unit delivered a claimed 611bhp and 448lb ft, and having the engine set back behind the front wheels and the bulk of the car’s other heavy components between the axles promoted an easy, natural handling balance. There was more. The 599 also introduced such features as ‘magnetorheological’ semi-active dampers, a bespoke ‘F1-Trac’ dynamic stability system and the quickest-shifting version of the F1 auto-clutch manual yet, appropriately dubbed F1-SuperFast. The result was a car emphatically more advanced than the 550/575M it replaced.

It all worked superbly. On the road, the 599 was infused with a satisfying tautness. The transmission controlled the clutch more positively in manoeuvring than other F1 types, but just as smoothly; the throttle and brake had good weight and feel. The V12 sounded glorious, and the ebb and flow of its complex, thunder-laden note when you pressed the throttle deeply in a high gear was epic. There was a distinct pick-up in the delivery at 3000rpm and another at 5500, by which time you were fast approaching three-figure speeds in fourth. The 599 merely felt like it was getting into its stride…

Find a used Ferrari 599 on evo Cars for Sale

The contribution of the magnetic dampers went largely unnoticed – just as it should be. Roll, pitch and squat were tempered by the system, yet the 599 felt quite natural through a series of curves. Through the seat of your pants it felt like quite a heavy car, yet terrifically agile.

Meanwhile the F1-Trac system subtly modulated the power, based on the inputs of various sensors. Best of all, switch the manettino to its ‘all off’ setting and the 599 was easy to hold in a long, languid power-slide. To call it rewarding was an understatement.