Faster than an Enzo around Ferrari’s test-track, the third GTO is one wild ride 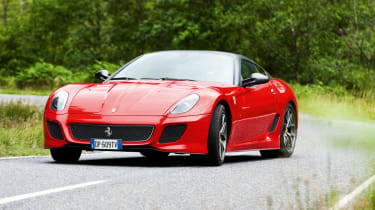 Ferrari trimmed around 100 kilos of excess fat from the 599 GTB Fiorano to create the 599 GTO – the third car from Maranello to wear the most celebrated set of initials in the history of fast cars.    The weight-shedding regime was fastidious. Forged wheels and titanium bolts saved 22kg, snug-fitting carbonfibre-shelled Sabalt seats trimmed a further 17kg, and on it went. With the output of the Enzo-derived V12 ramped up by 50bhp to a monumental 661bhp, the net effect was a power-to-weight ratio of 418bhp per ton, which put the GTO firmly amongst the world’s most ferociously potent supercars.

Find a used Ferrari 599 on evo Cars for Sale

According to Ferrari insiders, the GTO was deliberately set up like a racer to be unstable at the limits of grip – to make it more agile and more adjustable on the throttle. In other words, this was a car for serious driving enthusiasts, and at least as at home on a racetrack as on the public road. The GTB’s sophisticated adaptive suspension was recalibrated, the wheels and tyres had grown, the brakes not only featured carbon-ceramic discs as standard but also carbon pads – a first on a road car. The upshot was that it was the fastest ever road car around Ferrari’s own test track at Fiorano.

On the road, it made for a mind-expanding rush. The performance was other-worldly, the V12 sharp and angry in its upper reaches. Braking performance was absolutely mighty. The handling lived up to its promise: understeer had been banished, and if you were careless with brakes or throttle it could snap into oversteer.

The GTO was a proper, red-blooded Ferrari with a louder bark and a greater propensity to bite than the GTB; a wild ride but one just civilised enough to enjoy on the public road. It might not yet have the classic status of the two earlier GTOs but it’s one very special Ferrari.