new for 2013, Ferrari’s latest flagship supercar is also its fastest road car yet 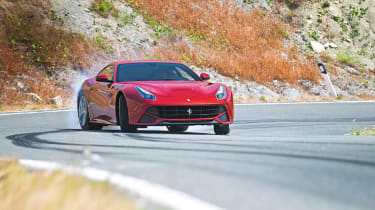 Ferrari’s stated aim with the F12 was clear: to introduce mid-engined agility, traction and roll stiffness to the front-engined V12 range. In other words, make it handle like a 458 Italia. In the process, it has created a car that takes a giant stride over its 599 GTB predecessor – and indeed every other Ferrari that has gone before. With 730bhp, the F12 is the most powerful road car ever to wear that famous shield and the quickest around Fiorano, too. With a time of 1:23.0, it blitzes the hardcore 599 GTO by a full second and the Enzo by 1.9sec.

Switching back to a mid-engined configuration for the F12 was quickly dismissed – the benefits it brings in terms of centre-of-gravity and traction were outweighed by sacrifices to practicality, useability and visibility. The F12 had to retain the GT credentials revived by the 550 Maranello. So work began to create a lighter, lower, stiffer structure with a weight distribution conducive to exceptional traction. The V12 is mounted further back in the chassis and 30mm lower, and the dash and seats are around 25mm lower, too. The overall weight distribution is 46:54, helped by the transaxle layout.

The ‘aero bridge’ in each front wing creates downforce by channelling air from the bonnet down the flanks. It also disrupts the wake from the wheel-wells to reduce drag. Ducts divert air from the rear wheelarches up through a grille on the fastback and onto the Kamm tail – in effect, a sort of ‘blown’ rear wing. In combination with a flat underbody and a substantial rear diffuser with four fins, downforce is increased by 76 per cent to 123kg at 124mph compared with the 599.

Remember the 599 carried those magnetorheological dampers? The ones with instantaneous response and unrivalled range? Well, the latest dual-coil piston reduces friction, has a wider force range and cuts overall response time by 75 per cent to just five milliseconds. Such is the pace of progress in Maranello these days. Then there’s the seven-speed dual-clutch gearbox…

Find a used Ferrari F12 on evo Cars for Sale

And at the heart of it all, the dry-sumped, direct-injection 6.3-litre V12, first seen in the FF, now produces 116bhp per litre and generates 80 per cent of its 509lb ft maximum torque from just 2500rpm. Prod the ‘engine start’ button on the tiny hexagonal steering wheel and it ignites instantly into a flat, busy idle.

Shortening the wheelbase and quickening the steering ratio was a key part of hitting those agility targets, but at first it makes the F12 feel darty and nervous, though you adjust to it. You also have to adjust to the almost overwhelmingly fierce acceleration that seems to grow in intensity with every engine revolution and every new gear. Then there’s the way the rear of the car is so keen to point the nose into an apex, and the spikes of oversteer on the exit as you hit full throttle. That’s not to say that the F12 is unpredictable or unmanageable, just that the scale of the performance, the speed you can carry and the neutral balance demand that the driver stays completely focused on the job.

Turn off the electronic stability systems and the F12 doesn’t fall apart or alter its essential character, doesn’t suddenly become a mess of scrabbly wheelspin. In fact, once you adjust to that steering, the chassis balance is fantastically trustworthy, with mild understeer ebbing into a smidge of oversteer. You have to be quick to stay on top of the F12, but then you’re going so fast that to expect anything else would be ridiculous.

The F12’s vast performance gives it an edge over the 458 that never diminishes, even if it can’t quite match the delicacy and control of the mid-engined machine. And while its wider role means it doesn’t feel quite as focused as the 599 GTO, as a mad, life-affirming supercar, the F12 is pretty darn special. It also rediscovers the effortlessness that made the 550 and 575 so bewitching. Ferrari was right to stick with the front-engine layout.