The underachieving 348 morphed into the superb – and utterly gorgeous – F355 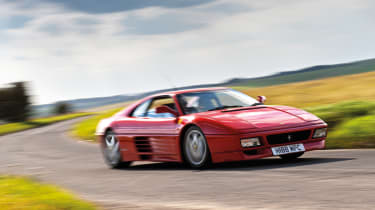 One of the most widely derided Ferraris is the 348, introduced in 1989. It quickly gained a reputation for edgy handling, while its chunky lines and Testarossa-style slatted side air-intakes compared unfavourably with the gorgeous 328 it had replaced.

In fact today the 348 is being reappraised, with much to enjoy in its V8 and unassisted steering, so long as you don’t take too many liberties with the handling. But in the mid-1990s, Ferrari urgently needed a return to form, and the 355 that replaced the 348 in 1995 was just the car.

The 355 introduced five valves per cylinder to the stalwart V8 (that was the ‘5’ in 355, creating yet another Ferrari naming system), not to mention dry-sump lubrication, titanium conrods and a six-speed gearbox.

The F355 was also significant for being the first Ferrari to be offered with the F1-derived paddle-controlled electronic gearshift system with its automated clutch. Meanwhile its revised suspension, with electronic dampers, cured the 348’s worst tendencies. Arguably, never had so much Pininfarina beauty, scintillating V8 music and fine handling been poured into an entry-level Ferrari.

But then Ferrari’s pride had been at stake, the 348 regularly bested by not only the contemporary Porsche 911s but also Honda’s new NSX. The F355 had to be better than good, and it was.

Even today, it’s the mid-engined Ferrari you’d probably buy if you couldn’t stretch to a 458. It wouldn’t be as fast, of course – 0-60mph in a claimed 4.7sec felt if anything a little on the optimistic side – but it would make you sigh with satisfaction just the same. With prices today starting at just a little over thirty grand, it’s a hugely tempting secondhand buy. And the 348 can be had for even less, with even well-cared-for examples available for as little as £25K.