evo's Harry Metcalfe has one night to drive a Ferrari Enzo supercar 1000 miles to the south of France. Road trip feature and videos here 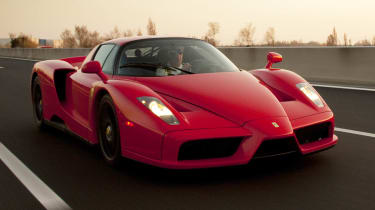 It sounded like a simple delivery job. Pick up Nick Mason’s Enzo from Bob Houghton’s Ferrari emporium in the Cotswolds and deliver it to the Col de Vence – 950 miles away, in the south of France – in time for a photoshoot starting on Tuesday morning. The Enzo was at Bob Houghton’s because a stone had flicked up and punctured the oil cooler. With a new one due to arrive on Friday, time was tight, but if I set off on Sunday afternoon I’d have a comfortable drive down to the French Riviera on Monday.

What a trip this was going to be. Then, just as I was busy congratulating myself for being such a jammy so-and-so, the phone rang. It was Bob Houghton with some bad news: ‘I’m afraid we’ve just heard from Ferrari that the new oil cooler now won’t be with us until Monday lunchtime, at the earliest. We’ll need a few hours to fit it and if it checks out okay, the car should be ready around 3pm. Sorry!’ Oh flip. My relaxed cruise through rural France had suddenly gone up in smoke. Even if there were no further hiccups, time was horribly tight now, and as there was no chance of rearranging the other cars involved, the only way to get the Enzo down there would be to drive it through the night. As I arrive at Bob Houghton’s just after 3pm, the Enzo is being backed out of the workshop, having been given the all-clear. I go to throw my bags into the luggage area in the Ferrari’s pointy nose only to discover there’s room for just one squashy bag in there. A half-empty one. I’ve always thought having a change of clothes was overrated anyway… Mason’s Enzo has recently had a set of FXX wheels fitted, complete with Pirelli P Zero Corsa tyres, and they look fantastic, adding even more aggression to the chiselled good looks of this ultimate Ferrari. It’s hard to believe the Enzo will celebrate its tenth birthday next year; it still looks incredibly contemporary today. With no time to waste, I pull the little flap at the rear of the driver’s door, which then arches upwards, half the sill going with it. The Enzo’s cockpit is a shrine to carbonfibre; only the seat fronts, roof and the airbag have a token covering of cured cow-skin, everything else finished in glossy carbon. With only half a sill to clamber over, getting in is a doddle compared with most other supercars, and as I settle down in the surprisingly comfortable seat, my eyes are drawn to the fabulous central tacho with its 8000rpm red line. Twist the key, prod the starter button (on top of the slender central console) and the engine whirs into life before settling down to a busy idle. I click the four-point harness around me, pull on the right-hand paddle and inch my way out of the car park. I’m surprised by how hushed this Enzo is, but then Nick’s car still has the standard exhaust in place and, as I discover later, it’s all the better for it. The engine is soon drowned by the incredible amount of road noise coming through the cabin, though. Seems the Enzo has no insulation whatsoever, and with carbon being a particularly good transmitter of sound (I will later measure 99.7 decibels in the cockpit at 75mph on coarse tarmac!), it’s incredibly noisy in here. A few exploratory blasts up the gears soon dispels any thoughts that the Enzo might be falling behind in the performance stakes. It’s properly quick, with real power building from 4000rpm, which is also when the valves open in the exhaust. It’s then that the Enzo really comes alive, screaming to the 8200rpm cut-out. For now, though, I need to calm down. Tonight’s priority is to get this car to the location for tomorrow’s shoot. Nothing else matters.

As night falls, the traffic begins to thin and I arrive at the Eurotunnel in time to catch the 8.15pm train, which delivers me to France just before 10pm, European time. Never has the south of France felt so far away as it does now but, as I keep telling myself, I’m in a bloody Enzo, and that simple fact should be enough to keep me awake for the next 763 miles.

Having filled up with fuel at the last filling station in the UK, my first stop in France is some 270 miles later, just before Reims, at 12.30am. Filling the Enzo tank costs £120 a time but at least you get several minutes to stare into that wonderful engine bay. The 650bhp 6-litre V12 is a serious piece of kit, and having it on show like this is all part of the Ferrari magic.

As the miles slip by, I really start to struggle with keeping the speed down to the legal limit (an indicated 95mph equals around 3300rpm in sixth). Eventually, with the autoroute becoming increasingly deserted, I can’t resist it any longer. Flicking down the gearbox, I give it full chat in third. The engine instantly digs deep, emitting a delicious howl. I haven’t got Race mode selected, so, as the red line approaches, the gearbox automatically pops into fourth at 108mph. Fifth arrives at precisely 143mph and lasts until sixth is needed at 181. I’m buzzing now. This full attack probably only lasted some 30 seconds or so, but how I wish I could do the whole journey at these sorts of speeds. Big speeds are incredibly easy in the Enzo. It’s like the car is covered in a special layer of Teflon, allowing it to slip effortlessly through the cool night air. In fact, this side of a Veyron, I can’t think of a car that builds speed quite as easily as the Enzo. You do need to be alert, though, as it feels nervous at high speeds, thanks mainly to the ultra-sharp steering. You also need to take care in crosswinds, which seem to unsettle the Enzo more than other supercars. By 2.10am I’ve got as far as Dijon and decide it’s time to have a kip, so I park up and recline the seat as much as I can. It’s not easy, but with a rolled-up jacket as a pillow, I manage about an hour of decent shut-eye. A quick coffee at the service station later and I’m off again, still with 430 miles to go.  At 5am I stop for fuel just south of Lyon. The Enzo won’t win any economy competitions, averaging 16.5mpg at 95mph. I park up for another nap, but a stream of lads pour out of a coach in the car park and, with camera phones at the ready, make a beeline for the Enzo. Rather than become tonight’s Facebook sensation, I quickly move on and pull into a lorry park, out of sight of the amateur paparazzi. When I awake some 50 minutes later a few of the trucks are making their way out to the motorway. Seems as if France is starting to wake up, too.  As I start heading east just above Marseille, the sky turns pinkie-orange, signifying dawn is almost here. It’s a welcome sight. The Mediterranean sun is blinding as it finally begins its slow ascent, but it feels beautifully warm through the Enzo’s windscreen. Watching the sun come up is always magical, but today it’s telling me I’m on the home straight. Another fill-up and a breakfast croissant later and I’m approaching Grasse in the morning rush hour. I’ve almost done it. I look out at all the commuters around me and wonder who’s had the more memorable trip to work this morning, them or me. Then I spot the sign indicating the start of the Col de Vence. This is what I’ve driven all this way for.

The Enzo feels electric on this early part of the climb to the 1760m summit. The carbon brakes are super-strong, but it’s the engine that dominates everything. Flicking through the gears and feeling that pointy nose dart instantly from one apex to another, it’s like the Enzo has been waiting for this moment. I have too, and a few hairpins later I park up at the pre-arranged meeting point [for our Ferrai Enzo v hot hatchbacks test]. I’ve only done ten miles or so of today’s route, but I’m worried for the other cars in this test now. I know we’ve assembled the best über-hatches on sale today, but, as Richard Meaden prepares to take up the story, I reckon they’re about to witness a supercar masterclass on these epic Alpine roads. Bring it on… Click here for our Enzo v Focus RS v Subaru v Audi RS3 video