Ferrari Portofino review - faster and lighter than the old California, but is it a real Ferrari?

New Portofino is faster and easier to live with than the old California, but misses some of the magic that makes other Ferraris great 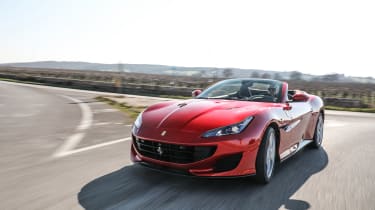 As a replacement for the 10 year-old California, the Ferrari Portofino promises to be the most usable new Ferrari money can buy. So although it’s not perhaps the most dramatic car made in Maranello right now, it is easily the most practical, says Ferrari, with more rear seat space, a bigger boot and more equipment than its predecessor. The £166,180 Portofino, reckons the factory, is a Ferrari you can drive 365 days a year.

It’s lighter than the California T by an impressive 80kg. It also benefits from an all-new front-engined, rear drive chassis and features new electric power steering plus a third generation electronic differential. 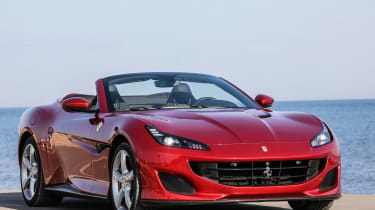 All out the Portofino has a top speed just one mile an hour shy of the magic 200mph mark, and thanks to a launch control system it can hit 62mph from rest in a mere 3.5sec. Zero to 124mph (200kmh) takes 10.8sec, so although it’s a usable Ferrari, it’s also an extremely quick one.

As with most Ferraris nowadays, the gearbox is a seven-speed dual-clutch with the paddles that are fixed behind the wheel, ie they don’t move with the steering wheel. Shift speeds are faster and smoother than before, says Ferrari, depending on where you set the steering wheel-mounted and F1-inspired manettino switch.

The Portofino’s engine and performance are impressive, true, but it’s the chassis, steering and suspension that have been more comprehensively worked upon in an attempt to make the car as capable as possible on the move, but also easy to interact with. One does not, for instance, require the same skill sets behind the wheel to drive the Portofino quickly compared with the rest of the range, says the factory.

As such the manettino switch is simplified to contain just three settings in the Portofino; comfort, sport and ESC off. The new electronic differential generates much more traction than before, says Ferrari, but also aids stability at all speeds. The electric power steering system is a development from the one pioneered on the 812 Superfast but in this case is lighter in feel and, thus, more manageable every day (in theory).

The dampers are also electronic while the seven-speed dual clutch “F1” gearbox shifts faster and more smoothly than in the California T, says Ferrari. The 20in Pirelli P-Zero tyres are also bespoke for the Portofino. Kerb weight is an impressive 1664kg.

Very quick, yes, with little or no lag from the twin-turbo V8 engine. And it sounds pretty spectacular at full beans, too. Plus the dual clutch gearbox works an absolute treat in both directions, seemingly in any of the manettino settings. 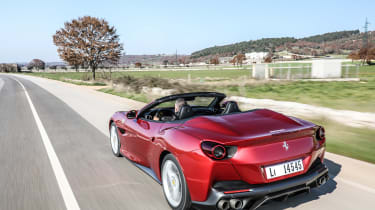 Yet overall there’s something curiously lacking in the Portofino’s dynamic repertoire. The steering in particular feels too light in any of its settings, and is therefore too distant in its feel and response. And at the same time there’s a strange absence of feel beneath your backside when cornering as well.

You can feel the electronics doing their thing on the move, providing the car with a surprisingly fine ride quality, eradicating kickback through the steering over rough roads, both of which are admirable qualities. But at the same time the suspension feels over-digitised in the way it reacts at speed. Throw the Portofino hard into a bend, for example, and there is almost no body roll, yet the steering is light, the grip levels impressive. Which makes it feel a little bit like you are playing a computer game, rather than driving an actual car. It’s all a bit too easy to be honest, and as a result the depth of ultimate satisfaction never quite arrives.

> Ferrari F355 - history, reviews and specs of an icon

Ferrari says this is exactly how the Portofino should be perceived because it is a car you can use 365 days a year. But personally I’m not 100 per cent convinced, even if there is more room in the rear seats, a much more efficient air conditioning system and a retractable hard top that can be lowered at speeds of up to 30mph in just 14seconds. Even from an “every-day” Ferrari I’d like a bit more touchy-feely stuff to relish beneath my bum and fingertips please. 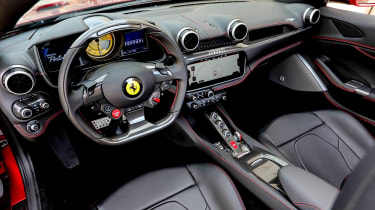 On the one hand £166k sounds like an awful lot of money, but beside the new Aston Martin DB11 V8 Volante (£160k) the Portofino actually seems like decent value – for a Ferrari. Particularly when you consider how well equipped it is as standard, and how much quicker it is than its nearest front-engined rival.

At the moment the waiting list is already long, and is growing. Order a Portofino today and you’d do well to take delivery of it by this time next year.