Every bit as thrilling as the Tributo coupe 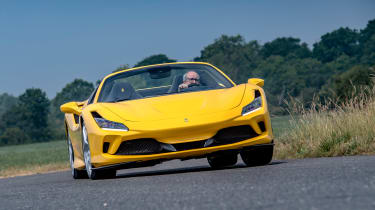 For some, the supercar experience is best savoured roofless. While we’d ordinarily opt for the fixed-roof model and all the benefits it confers, from structural rigidity to the UK climate rarely being perfect for roof-down driving, there’s no doubting the appeal.

The Ferrari F8 Spider is the latest in a chain of roofless, mid-engined, V8 Ferraris that began with the Dino 246 GTS, though true Spider variants, with full folding roofs rather than pop-out panels, started with 1993’s Ferrari 348 Spider (though technically, the Mondial got there in 1985). 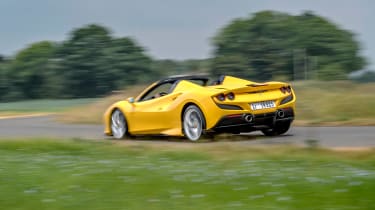 Relentless development means Ferrari’s core supercar is a very different beast these days, but the theme is much the same: all the performance of the coupe, but better access to the open air.

Ferrari’s award-winning 3.9-litre twin-turbocharged V8 makes another appearance here, packing a specification that’s fairly close to that of its fitment in the outgoing 488 Pista, with titanium con rods, a lighter crankshaft, a lightweight flywheel, as well as higher-lift cams and shorter inlet tracts. The exhaust system is new, but that’s partly to offset the now-required fitment of gasoline particulate filters to reduce emissions. The gearbox remains Ferrari’s seven-speed dual-clutch.

The key figures are 710bhp at 8000rpm and 568lb ft from 3250rpm and, despite the components required to shift the roof from closed to open and back again, performance hasn’t been compromised a jot; you’ll still pass 62mph from rest in 2.9sec, and go on to 211mph given a quiet and legal enough stretch of road. 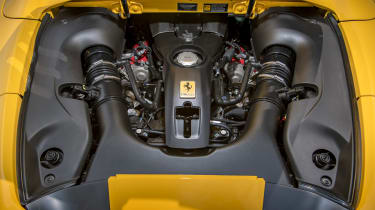 For Spider, see Tributo. Essentially under the skin the Spider carries across everything that makes the Tributo the car it is, from the latest iteration of Side Slip Control, to the traction-maximising Adaptive Performance Launch function, and styling that differs slightly but purposefully from the old 488’s.

The new part is clearly the two-part folding roof, which does its dance in 14 seconds and at speeds of up to 28mph, while the rear deck is naturally reprofiled thanks to this addition up top. Visually the Spider works better with the roof down than with it up, but in the interests of thorough journalism we can report that aerodynamically the cabin will remain mostly dry at motorway speeds in heavy rain. (OK, we got caught roof-down in a rainstorm. Only the tops of the seats got a little damp…) 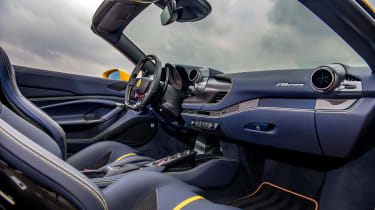 Driving the F8 Spider isn’t so much a series of actions as a broad spectrum of experiences, from the infrared warmth of cruising along, roof down, in a car that’s admirably liveable for a car with such potential, to the ultraviolet intensity of deploying anything close to its accelerative and cornering potential.

Starting, as it’s probably wise to, at the more relaxing end of that range, the F8 Spider really does feel quite friendly when you’re ambling about. You’re only ever a toe flex from getting a taste of that engine, but save for steering, whose speed needs some adjusting to at first, the Spider slurs smoothly through its gearchanges, is largely untroubled by patchy road surfaces (particularly if you select the ‘Bumpy Road’ damper setting) and is even relatively quiet, roof up or down. 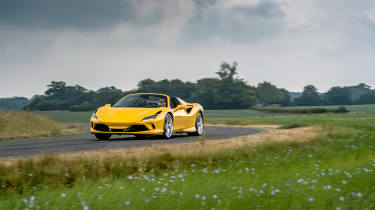 Somewhere in the middle of the spectrum you have a car that makes going very quickly indeed very easy indeed. The high-geared steering rack is so responsive that there’s a Caterham-like economy of movement to any cornering input, and there’s never any doubt the front tyres will struggle to bite – just point and it follows.

Accessing the engine’s potential is like turning a rheostat. Give the throttle a purposeful squeeze with the tachometer at anything above 2000rpm or so and the F8 is drawn towards the horizon like there’s some unstoppable force pulling it along on a rope. If you’re going merely quickly traction is never an issue either, particularly in the default ‘Sport’ manettino setting, so you can get on the power with some intent out of corners without fear of the car biting back.

Driving at no more than half the car’s potential you’ll already be quicker than virtually everything else on the road. The F8’s skill, perhaps particularly in Spider form with the extra sensations of having the roof dropped, is that it still makes you part of the action even if you’re nowhere near its limits. At similar pace a McLaren is probably still more tactile, but the scalpel-like precision of the F8 has its own appeal.

And at the ultraviolet end? Ultra-violent, more like. The F8’s pace is pretty shocking when you find a stretch long and clear enough to unleash it, and the rest of the car steps up its game to meet that remarkable engine.

The engine still lacks the aural character of the old naturally aspirated units – it’s crisp and mechanical, but not musical – but so brutal is the acceleration you’ll probably be overwhelmed by sensations other than sound unless you’re on a circuit anyway. Gearshifts are lightning fast, the brakes scrub speed powerfully and precisely, and the chassis is so grippy and responsive the car behaves like it’s half the weight. You start to feel both ends of the car moving around more but always within a broad window of control, provided you’re not taking the mickey with the laws of physics.

It’s fast, intense, and really demands a circuit to fully exploit, but the F8 Spider, like its fixed-roof counterpart, is unquestionably a great supercar. 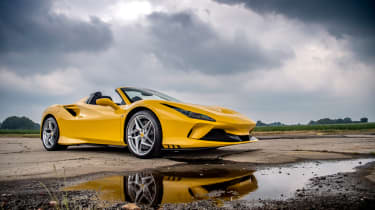 What that number won’t get you is access to the enormous range of options offered by Ferrari, covering everything from different interior trim accents to exterior paintwork, carbonfibre components and, of course, the £2400 that Ferrari will charge you for the world’s smallest interpretation of Apple CarPlay on the car’s instrument display. Ferrari’s road car division clearly has more of a sense of humour than its racing team.

The F8’s natural rival in Tributo or Spider form is the McLaren 720S, which has a similar power output and is similarly remarkable to drive, albeit with a very different look and feel to the Italian. Choosing between the pair is a close-run thing indeed – the 720S is a previous eCoty winner, don’t forget, so it’s by no means clear-cut, so the eventual twin-test will be very interesting.