One of the world’s finest GTs, made even more appealing – for some – without a roof 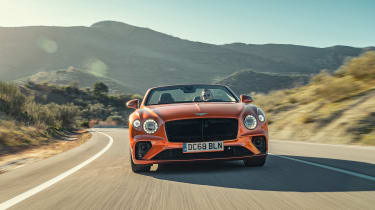 For some, only a convertible will do – and fans and customers of Bentley now have that option with the new Continental GT Convertible.

The coupe already ranks highly in our estimation, neatly fixing many of the issues we had with its predecessor, but historically roofless versions of such cars have never hit the spot as accurately – for driving enthusiasts, at least. Lighter, stiffer and with greater engineering focus than ever before, can the new Continental GT Convertible change that?

As per the fixed-roof Continental GT the Convertible uses the latest generation of Bentley’s 6-litre, twin-turbocharged W12 – an engine layout that allows V12-style refinement in a relatively compact package, albeit one that still requires a fairly sizeable engine bay by the standards of most production cars.

> Click here for our review of the Continental GT

It’s a set-up good for 626bhp at 6000rpm, and a torque curve that looks more like someone expertly removed the top five thousand feet of Everest, with a 664lb ft plateau that persists from 1350rpm and doesn’t let up until the crank is spinning at 4500rpm.

Also in common with the coupe, Bentley now uses a dual-clutch transmission for the Continental GT Convertible, albeit one that’s similar to other DSGs mechanically rather than in operation. Bentley takes the eight-speed ’box, as also found in the Porsche Panamera, and then controls its behaviour in the thousands of different ways it’s likely to change gear, ensuring a suitably Bentley-style change whatever the scenario.

The most obvious highlight, above and beyond those common to all Conti GTs, is the new roof arrangement. The fabric top can be whisked back into its cubby hole in 19 seconds, at speeds of up to 31mph, and does so in virtual silence – no cheapo whirring of motors here.

Despite the new gap above your head, Bentley claims the latest Convertible is five per cent stiffer structurally than before, while the body as a whole is 20 per cent lighter (albeit weighing in at 2414kg altogether) – and more impressive than any of that, now matches the previous-gen GT coupe in refinement terms.

Does sense of occasion play a part in the driving experience of a car? It certainly does with the Continental GT Convertible, which looks magnificent standing still, let alone barrelling down a road. You’ll have your preference on whether coupe or Convertible gets the nod, but in the right colour combination and with the roof lowered, there’s something very special about the latest Bentley.

It’s no less special once onboard – as we’ve noted previously, the latest car’s cabin is a big step forward over its predecessor, and the rotating centre display is a neat touch, allowing you to hide the big and unavoidably modern touchscreen, replaced by either a trio of dials or, if you’re parked, a simple panelled facade. From the perfectly sized steering wheel to the outstandingly comfortable seats this is one of the best modern car cabins, though if you’re inclined to carry rear seat passengers they may not agree, as space is more kid- than adult-friendly back there.

Thumb the starter button and there’s a brief whirr from the starter motor before the 12 cylinders all fire into life. The GT pulls away with a creamy smoothness alien to any other DSG, and in general driving the engine is near-inaudible and the gearchanges imperceptible. The low-speed ride soaks up most imperfections, and you tend to hear bumps more than feeling them.

The Conti hides its bulk well as you start to raise the pace. Its W12 isn’t an all-time classic in the aural stakes but the insistent, almost endless reserves of torque and eager responses to each flex of your right foot mean you’ll be travelling quicker than most other vehicles with very little effort indeed.

Refinement with the roof up is outstanding – it really does feel more like a coupe – and with it down, and the wind deflector raised, you get most of the open-air benefits of any convertible, but almost none of the bluster. Only on coarse surfaces and bumpier stretches does undesirable feedback creep in, partly as prominent road roar from the wide tyres, and partly as small but perceptible scuttle shake thanks to the open top.

The GT Convertible really comes into its own when pressing on though. Bentley has rightly prioritised comfort over ultimate body control on this car, but with such a wide footprint, ample rubber on the ground and trick active anti-roll technology means the car is incredibly capable for one so heavy.

You can occasionally feel the weight – mostly when testing the powerful brakes into tight downhill corners, or powering over undulations – but it’s surprisingly agile otherwise, and only brutal inputs will see front or rear axles losing their purchase on the road. The steering is well judged too – a model of how response, consistency and progressive weighting can make up for any lack of actual feedback.

In short, the Continental GT coupe’s qualities are undiminished in convertible form – it remains probably the best grand tourer currently on sale. 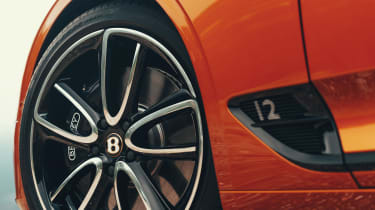 Bentley has set the base price of the Continental GT Convertible at £175,100, or just over £18,000 more than that of the coupe. This only tells part of the story however, as much of the car’s appeal is in its personalisation – and there the world is your oyster. The Barnato Green example we drove, with ‘Portland’ hide on the seats and both Cumbrian Green leather and dark stained burr walnut wood elsewhere, came with a spec sheet boasting over £47,000 of options, for an on-the-road price of more than £222,000.

This is hardly a state of affairs limited to Bentley however, so isn’t intended as a criticism. It just makes determining precise rivals a little tricky. On a very basic level, you’re looking at the usual suspects, such as the Mercedes-AMG S63 Cabriolet (base price £141,170), Aston Martin DB11 V8 Volante (£159,900) or Ferrari Portofino (£166,241). Given the archetypal cross-Europe jaunt to sunnier climes, the Bentley would still be our choice – though the DB11 is definitely at its best in V8 trim.