New images and details on Fiat's latest 500 variant, to be unveiled at the Geneva motor show 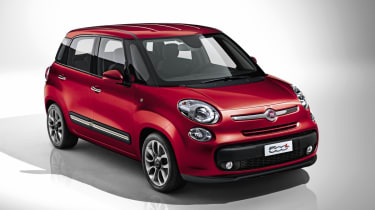 Ahead of its official unveiling at the Geneva motor show on 6 March, Fiat has released the first images of its Mini Countryman-rivaling 500L. As you can probably guess, the 'L' stands for large - and the 500L is in total 4140mm long and 1780mm wide, and is said to comfortably seat five people.

Fiat says that the baby-MPV will be built at its Kragujevac plant in Serbia, and is expected to go on sale in Europe during the final quarter of 2012. Engine choice will initially be limited to the 1.4-litre petrol, 1.3 MultiJet diesel, and the revolutionary two-cylinder TwinAir unit.