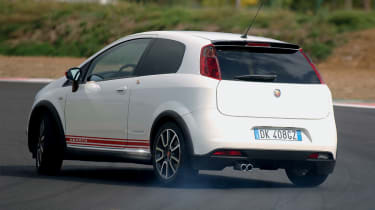 A massive silver scorpion, pincers spread wide, tail poised, greets you warmly as you walk through the door. The wall to your left is covered in black-and-white photographs showing victorious drivers and cars. There is a familiar red and yellow shield on the wall and new merchandise is tastefully laid out on shelves and racks. Peer round the corner and if you’re not already sold you soon will be, because sitting in the middle of everything is an Abarth 695, rear bonnet propped open. Outside, brightly lit red and white letters proclaim the return of Officine Abarth to Corso Marche in Turin.

The Fiat group is enormously lucky. If any other company wanted to launch a sporting brand (Abarth will be a standalone fifth marque alongside Maserati, Lancia, Alfa Romeo and Fiat) it would have to start from scratch. It would have to convince the public of its intentions, its philosophy, its pedigree. But Abarth is already known and loved the world over. It has enormous amounts of goodwill and Fiat seems very aware of this.

The name comes with responsibilities, however. If the new Abarth is to be a success then it will have to embody what everyone fondly remembers from when Carlo was at the helm. It bodes well, therefore, that the S2000 rally car has been campaigning very successfully all this year, long before there was a road car to market.

But now there is a road car, the Abarth Grande Punto, and it’s being displayed in this flagship showroom where we’re also about to settle down for the press conference. Although clearly based on a Fiat Grande Punto, you won’t find a single Fiat badge on it. There are scorpions on the wheels, a shield on the bonnet, a shield and tricolour lightning bolt on each flank, more shields inside, but not a single four-letter word beginning with ‘F’.

The colour scheme of all the launch cars is ‘1949 White’ (1949 being the year Abarth first came into existence) with red detailing. It gives them a certain Porsche RS look, which I suspect some will love, while others will be pleased to hear you can choose from Speed Red or Scorpion Black paint instead.

The new front bumper, with the main-beam lights set in black surrounds, certainly suits the car, and the design of the 17in wheels wouldn’t look out of place on something from Sant’Agata.Inside, there is a lovely swathe of smooth body-coloured plastic across the dash, which is then let down by a centre console that has without doubt the worst ‘carbon effect’ I have ever seen. Fortunately the seats are excellent, with particularly good thigh support.

Under the Abarth’s skin is the basic Punto MacPherson strut front and torsion beam rear, but with 20 per cent firmer springs, a ride height lowered by 10mm and a thicker anti-roll bar at the front. The front track has also been widened by 6mm. The biggest disappointment of the press conference is the announcement that ESP is not switchable (although traction control is). Apparently you can’t drive more quickly with ESP off, only more dangerously. Hmm.

You might not be wetting your undergarments with excitement either when I reveal that the Abarth has a turbocharged 1.4-litre engine. It gives the front wheels 153bhp to wrestle with at 5500rpm and 152lb ft for them to tame at 5000rpm. There is, however, a Sport Boost button on the centre console that increases torque to a healthier 170lb ft at 3000rpm.

On paper this leaves the Abarth stranded with the Fiesta ST, drifting between the Mini Cooper and the Mini Cooper S. The ‘Esseesse’ (see text at end of article) will clearly be taking on the S, so we must hope the insurance group in the UK is low enough for the Abarth to be a true young driver’s alternative to the Cooper.

The morning after the press conference we’re all bussed out to Balocco, Fiat’s test track, to drive the Abarth. This sounds great. After all, who wouldn’t want a private track to play on for a few hours? However, we’re restricted to a newly surfaced loop that’s smoother than a green at Augusta, which is not so hunky dory when you’re trying to assess a road car. The Abarth could glide over bumps like an S-class or boing from one pimple to the next like a Panda 100HP, we’re just not going to find out today.

What I can tell you is that the engine is much better than you would expect a 1.4 to be. It’s remarkably unturbo-like and, whilst it needs to be kept on the boil, it sounds good and pulls strongly between three- and five-thousand rpm. The Brembo brakes (305mm discs at the front) do a fine job of wiping off the speed lap after lap, too.

The shift across the six-speed gearbox is light and springy in action but never feels indistinct. A tap of the Sport button increases the weighting of the steering, but, on the track at least, it still feels slightly distant from the conversation being held between the P Zero Neros and the tarmac.

Being unable to turn off the ESP is all the more frustrating because the Abarth is a nicely pointy car, the front end gripping tenaciously and diving keenly for apexes, which suggests that with a little provocation the tail would be willing to play. At least the intervention of the electronics is well managed, allowing a little progressive slip at both front and rear before stepping in.

If you feel slightly cheated of a verdict then I’m afraid it’s a case of take a ticket and stand in line. That the Abarth held up well on track is good news – it hasn’t fallen at the first hurdle. But its real test lies somewhere in Wales or Yorkshire at a later date. The good news for now is that Abarth is back, and it’s not just a marketing exercise.

EssesseIf you think the Abarth Grande Punto seems a bit tame for a car badged with a Scorpion then you’ll be pleased to hear that an Esseesse (that’s ‘SS’ or Super Sport) kit will follow shortly.

The kit replaces the air intake, increases the size of the turbo and remaps the ECU, resulting in 178bhp and a mighty 201lb ft from the little 1.4. The suspension, meanwhile, is lowered by a further 20mm, the front track widened and 18in wheels fitted – inside which nestle drilled discs. Essesse stickers appear on the outside, while inside there are even grippier seats.

We got to drive a prototype at the launch and the first thing you notice is the new exhaust. It doesn’t look much, but the deep, resonating sound has to be one of the best to emerge from an in-line four in years. You can feel the turbo kick-in more noticeably and the Esseesse pulls much more strongly at the top of the rev range, too.

Handling wise, the steering is more precise thanks to the suspension changes and the car corners startlingly flatter and harder.

The Esseesse kit will cost around £3500 on top of a ‘standard’ Abarth Punto. Watch out Mini and Clio!