Clever engine, not so clever suspension 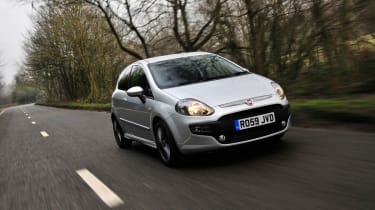 The new MultiAir engine is the highlight here, but the facelifted Grande Punto also has a new name, Punto Evo. Naturally we’re flattered. There are also a few technological updates, including the option of an integrated TomTom, and the bodywork has been tampered with. Still, by the standards of the supermini class it’s a good-looking hatch, especially in Sporting trim as driven here.

Engine choice is limited to one, but that’s OK, because the 1.4-litre turbocharged MultiAir is a fine thing. Available in lesser models with 105bhp, here it has 133bhp; weirdly it’s the most economical petrol Punto, capable of 50.4mpg Combined.

We’ve written about MultiAir before (issue 137), but the basics bear repeating. The system hydraulically controls the inlet valves – lift as well as timing – to improve economy and CO2. It’s a great engine. It sounds fab and the turbo response is phenomenal – it’s not an Abarth (that follows later, with a more potent version of this engine) yet it’s punchy and zesty enough to convince you otherwise.

Other components conspire against the fine work of the engine. The old five-speed gearbox has a loose, notchy shift, but it’s the suspension that disappoints: inconsistent damping leads to bounce and jiggle on all bar the smoothest surfaces. It’s OK once loaded up – and there’s plenty of encouragement to do so regularly – but dynamically a Fiesta is better.