The blue oval's flagship GT supercar has seen an update for 2020, adding powertrain tweaks and a new special edition to the mix 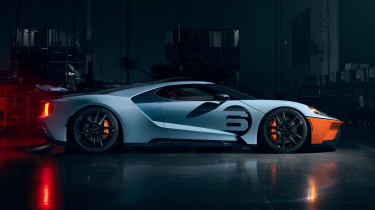 Ford’s second-generation GT has received its first update since its 2015 reveal, bringing more power, uprated cooling and suspension tweaks to the Le Mans racer derived supercar, alongside a host of other additions.

Powered by the same 3.5-litre twin-turbocharged EcoBoost V6 as before, the car brings a handful of developments from the track-only GT Mk II taking the output up by 12bhp to 650bhp in total - torque will likely remain at the 550lb ft mark. Revised ECU calibration, uprated ignition coils and gallery-cooled pistons all contribute to both a broader torque band and that increase in power.

To help maintain the powertrain at the optimum temperature, new buttress air ducts aim to increase airflow by 50%, with larger intercoolers added to keep charge air temperatures under control, allowing all 650bhp to be extracted no matter the conditions. Not only has power seen an increase, but so has sound - the previously-optional titanium Akrapovič exhaust system now comes as standard.

Aside from changes to the powertrain, Ford has also increased suspension damping in track mode for better stability.

New to the 2020 model year is the Liquid Carbon edition, stripping the GT of paint in favour of an exposed carbon fibre finish. This limited-edition comes as standard with carbon fibre wheels, with options such as titanium lugnuts, six-point harness anchors and various interior and exterior trim colours also available. 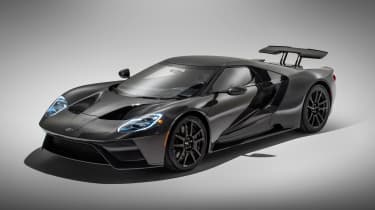 A favourite for many, the Gulf Racing heritage livery has received some tweaks for 2020, following customer feedback on earlier cars. Separating the blue and orange hues is a black pinstripe, and unlike before, the carbon fibre wheels available on the standard car are now an option. Paying homage to the back-to-back winning, chassis No. 1075 GT40, the optional carbon fibre number has been switched from a 9 to a 6.

Ford says production of the GT is set to continue until 2022. 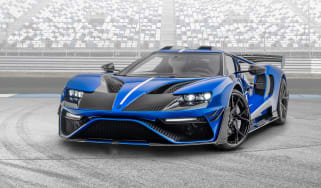