The new Ford Bronco off-roader has been revealed stateside; a counterpoint to the Defender and Wrangler 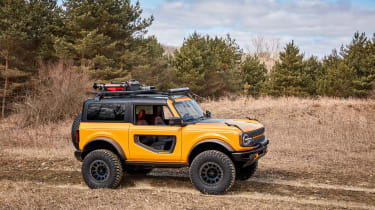 One of America’s greatest automotive icons is back, with Ford finally revealing the hotly anticipated Bronco. Before you get too excited, the new Bronco is unfortunately off the menu for the UK and other right-hand-drive markets, but there’s still a lot to like about the rugged new off-roader – and as a statement of intent for the company’s future products internationally it’s a fascinating insight into Ford’s future.

First of all the Bronco is not a car-based SUV in the usual sense, rather a more rugged body-on-frame off-roader in the same style as its key rival the Jeep Wrangler. It’s no longer based directly on an F-150 chassis as it traditionally was though, instead the new Bronco shares its underlying architecture with the smaller (and RHD-friendly) Ford Ranger. Ford’s decision to build the Bronco as a body-on-frame is also an interesting contrast to Land Rover’s decision to build the new Defender on a more car-like monocoque chassis.

Like the Defender, the new Bronco will be available in both short- and long-wheelbase forms, and feature a selectable four-wheel-drive system with either a simple mechanical transfer case or an optional electromechanical system with automatic on-demand engagement of two- or four-wheel drive. The front suspension is fully independent, while the rear is a more traditional solid axle, and both are able to be fitted with locking differentials selectable from a bank of switches on the dashtop. The Bronco is also optionally available with a hydraulically decoupling front stabiliser bar that dramatically increases wheel articulation, automatically reconnecting once the Bronco is back up to speed. Very clever.

The Bronco will be available with two turbocharged EcoBoost petrol engines, with two different transmissions. The first is the 2.3-litre turbocharged four familiar from the Focus RS and Mustang, here producing 267bhp and 310lb ft of torque. Four-cylinder models are available with either a ten-speed automatic transmission, or new seven-speed manual which includes a crawler gear for those sticky situations. Topping the engine range (for now) is a 2.7-litre twin-turbocharged V6 petrol with a chunkier 307bhp power figure and 400lb ft of torque. 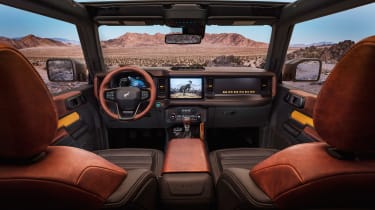 Like the Jeep Wrangler, the new Bronco has a removable top and doors for that proper outdoor experience. Both rigid and soft-tops are available, and while the process of removing these components is not a one-touch experience, Ford has put a lot of effort into making the process as pain-free as possible, ensuring the whole system is able to be done by just one person. The removable doors are frameless, making them more manageable when off the cars, and on four-door models they fit into the rear cargo space.

Given the open nature of the cabin, Ford has ensured the whole space is weatherproof, complete with waterproof digital interfaces and drainage holes in the cabin floor. Shared with the new F-150 is an optional 12-inch infotainment system, controlling, amongst the usual elements, Ford’s curiously named G.O.A.T terrain response system.

As mentioned, the Bronco will not be built in right-hand-drive form and therefore will not be offered by Ford in the UK. While its core rival remains the rock-crawling Jeep Wrangler, Land Rover’s new Defender remains an interesting counterpoint in how to reimagine this form of icon in a slightly different way. Prices in the USA will start at £23,950 when converted from US dollars, making it less than half the price of a basic Land Rover Defender in the USA.