We've bought a few silly cars in our time, but our new Mustang GT surely has to take the biscuit. Or should I say the flame-grilled whopper with cheese. 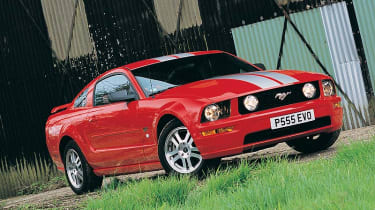 We've bought a few silly cars in our time, but our new Mustang GT surely has to take the biscuit. Or should I say the flame-grilled whopper with cheese.

When Harry and Jethro suggested the hair-brained scheme a few months back, there were a few collective misgivings about the big Ford's image, not to mention a design of rear suspension old enough to be my dad. But, once prejudice was put aside, the pair had a point. They were, after all, talking about a genuine 150mph car with 4.6 litres of prime American V8 that thumps an easy 300bhp through the rear wheels. And all wrapped up in an unashamedly old-school muscle-car body. No wonder our carefully considered objectivity went clean out of the window.

Only trouble is, Ford don't want to share the Mustang. Official word is it won't be coming to the UK, at least until the Blue Oval's financial woes have been sorted, which, judging by the state of the global car industry generally, won't be any time soon. But, as ever, when it comes to hard-to-get cars, where there's a will, or rather where there's a customer, there's an import specialist ready to satisfy demand.

And so it was that a conversation with Subaru import and tuning guru Iain Litchfield led to our acquisition of the big, brash Torch Red Mustang GT you see before you. And all for the princely sum of £25,995 all-in: a grand or so more than our current coupe favourite, the brawny 350Z, but a whopping £11,000 less than the Yank V8-powered 6-litre VXR Monaro. A bit of a bargain, in other words.

Litchfield had already imported a Mustang for his own amusement, and in so doing had forged strong relations with a Stateside supplier - and learned the vagaries of successfully getting the Stang through the UK's SVA test. When the car arrived at Litchfield's Tewkesbury base (after just a few short weeks, thanks to our chosen 'Premium' grade and colour choice being in stock) it was entrusted to chassis and engine tuning experts Powerstation. They checked the chassis alignment and gave the engine a full re-map to ensure it passes UK emission levels and runs smoothly on UK fuel. Naturally, if a few extra horses could be liberated in the process then so much the better. Which is why the Stang's output has now risen to an impressive 315bhp. The chassis check and remap are all included in the £26K price, which can't be bad.

Once Powerstation had completed the work, the Stang, already christened 'Bubba' for obvious and shamefully stereotypical reasons, was taken to the SVA test centre for approval. Unlike Japanese imports, which require much more work to comply with the UK SVA, cars manufactured in the US have emissions and crash test standards equal to or better than those in Europe. Consequently the Mustang was subjected to a level of scrutiny broadly similar to a basic MOT.

Most of the attention centred on the lights, as US cars utilise brake lights as indicators and don't have side-repeaters. Litchfield's fix? A discreet pair of indicator side repeaters beneath the 'GT' badges on the Mustang's flanks, and neatly converting the reversing lights for use as rear indicators. A small reversing light, centrally mounted low-down on the rear bumper is the finishing touch.

Pre-delivery fettling and SVA test completed, I collect the Mustang from Litchfield's premises and complete a tentative drive across the Cotswolds and home to Northamptonshire. It feels a big car, both in length and width, a fact made doubly daunting by being sat on the 'wrong' side. Fortunately the steering's direct but not overly pointy, while the clutch, gearshift and throttle response are conducive to smooth getaways.

There are assorted whines and chunters from the transmission in stop-start traffic, initially disturbing to ears used to the hush of, say, a BMW, but Litchfield says all the Mustangs he's driven have been the same. Nothing to worry about, then.

If overall refinement isn't quite up to European standards the soundtrack is right up there with the most evocative and enjoyable. Ford's 4.6-litre has become an increasingly familiar motor, seen in numerous low-volume sports cars, including the £80,000 MG SV-R. It's never struck us as overly vocal, keen or charismatic before, but in the Mustang it really does feel impressive, its note building from a classic burble at idle to a proper hard-as-nails howl as it hauls through the mid-range and on to its 6500rpm limit. It's smooth, too, and with a clean, keen-revving delivery that makes Chevrolet's 6-litre motor feel lethargic by comparison. All of which leads us to the conclusion that Powerstation's remap has more far-reaching benefits than those fifteen extra ponies.

Since arriving at evo, the Stang has barely paused for breath, the highlight being a trip to the Nürburgring in the hands of photographer Andy Morgan, chasing my Exige and Roger Green in evo's R300 Caterham. You can read all about it next month, but suffice to say that temptation proved too great during the two-day RMA trackday, and Bubba completed a handful of enormously entertaining laps that, besides straining my ribs from laughter, revealed there's much more to the Mustang than a big V8 and silver stripes. I'm tempted to have some GT3 RS 'kill' stickers made up and apply them to the driver's door, but the bootlid proudly wears a squiggly silver loop that any seasoned 'Ringer' will recognise as the ultimate badge of honour. And we haven't finished tuning the Stang yet!

It's going to be a fun summer.