Lots of miles covered by a number of drivers this month, with Brett Fraser, Andy Morgan and Harry Metcalfe all sampling the big-hearted Ford. All say the same, namely 'Phwoaar, it sounds good, doesn't it?' shortly followed by 'It's a bit bloody hairy in the wet!' 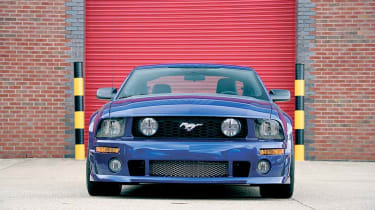 Lots of miles covered by a number of drivers this month, with Brett Fraser, Andy Morgan and Harry Metcalfe all sampling the big-hearted Ford. All say the same, namely 'Phwoaar, it sounds good, doesn't it?' shortly followed by 'It's a bit bloody hairy in the wet!'

They're right on both counts: the sweet-spinning V8 sounds fantastic, especially since we had the C&L (not CTS as I erroneously stated last month) induction kit fitted. However, such abundant grunt and a dousing of rain don't mix, especially with a set of war-weary US-spec Pirellis. On one particularly wet morning I swear I got to work with three prods of the throttle, and that was with the TCS system on. Turn it off and the morning commute is more like a scene from The Dukes of Hazzard.

All of which made my visit to Roush Technologies in Brentwood all the more timely. Nascar fans will know Roush as the builder of demon racing V8s, but it also builds highly-modified Mustangs, which can be ordered through thousands of Ford dealerships in the States. Better still, Roush also has a massive inventory of aftermarket tuning parts for the '05 Mustang. Hmm...

Sensing my wide-eyed enthusiasm, the good old boys from Roush handed me the keys to their '05 demo car. Currently awaiting the brake upgrade and supercharger, but fitted with the full suspension kit and the 18in wheel and tyre option, not to mention the complete Roush bodykit, it feels and looks like a far more serious proposition.

The Mustang's always been well-balanced but the suspension changes transform the handling and roadholding, with far stronger grip from turn-in to exit, a less floaty feel and added meat to the steering feel. And while the live rear axle's inherent limitations are exposed by particularly nasty mid-corner bumps, body control is generally far better. The upshot is you now feel connected to the car.

Impressed by the chassis improvements and rapt at the prospect of seeing a similar step up in braking, we've committed to dipping into Roush's chassis upgrades. Whether we go the whole Boss Hog and have the supercharged motor and bodykit fitted depends on whether I can catch Harry in a good mood. Wish me luck...