Ford is testing the next generation C-Max 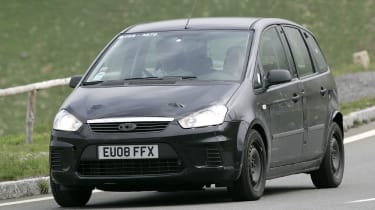 The current Ford C-Max was first launched in Europe back in 2003 and was treated with a mild facelift last year as part of its mid-cycle upgrade. New prototypes of the C-Max spotted in Germany suggest that Ford is already conducting public road-tests of the next-generation model due sometime in 2010. The next C-Max will first go on sale as a 2011 model in Europe but this version is also expected to be sold in North America for the first time. The prototype captured in these spy images is using a current model’s stretched bodyshell and its rear track is slightly wider.

Based on Ford’s European Focus platform, the new C-Max will likely share most of its engines with the updated hatchback range. This means a series of engines ranging in displacement from 1.4 up to 2-litre. The potent 2.5-litre turbocharged engine from the Focus is unlikely to appear in the new C-Max.