Chris Harris meets Ken Block, and has a sneaky go in his Gymkhana Ford Fiesta 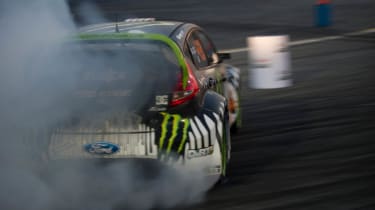 Competition cars are made for a specific reason. Yes, they’re built within guidelines and conform to rules, but underneath all that lies the purpose for their existence.

A rally car must cover a variety of terrains as quickly as possible. A NASCAR must circulate an oval in the shortest possible time – you get the gist. Viewed in these terms, Ken Block’s Gymkhana Fiesta is one of the most pointless engineering exercises ever undertaken, because, having driven it, I think I can now define its role in the autoverse.

It was built to be able to go backwards at 50mph, under full power in second gear. That is its sole reason for being. For the record, I must state that I thoroughly approve of pointless car-making adventures.

The need to travel backwards with all four wheels spinning forwards comes from the Gymkhana trilogy, a YouTube franchise so successful it trounces all other car-based material. As I write this, Gymkhana 3 alone has logged over 19 million views, and it was only posted three months ago.

Ken Block began his ‘Infomercial’ journey back in 2008 in a Subaru, but then, in a move that still sends Scooby chat-rooms into a frothy rage, he switched to Ford last year. That meant a Focus WRC for his entry to World Rallying, but it also necessitated the creation of a new Gymkhana tool. Boy did they go to town.

The Gymkhana Fiesta is actually a Swedish Rallycross Fiesta, made by Olsbergs under the watchful eye of multiple Swedish rally champ Andreas Eriksson. Apart from being fantastically over-wrought and capable of breaking traction in any one of its six forward gears, the Fiesta gives us a tantalising glimpse of what might have happened if Group B hadn’t died back in 1986. Last year, Eriksson took one of these cars to Pikes Peak and removed the 45mm plate that restricts power to ‘only’ 650bhp. From a 2-litre Duratec-based motor, they saw 875bhp on race day.

The stars had aligned themselves in hoon-land. First, it looked like a Fiesta, a car that Ford was trying to push in the US. And second, well, it would go backwards at a-lot-of-mph with all four wheels spinning in a forwards direction. Power wasn’t going to be a problem; a new Gymkhana car was born.

I’ve wanted to drive this car since I first saw it in France on the set of Gymkhana 3 (evo 149), but the point at which curiosity became need was when I saw Block literally flinging it the wrong way into a right-hander and dragging himself through with power and tyre annihilation. Team Block said there would be a chance to drive it in LA in early December. I hate flying enough to have never visited the west coast before, but the horror of row 62 on a 747 is worth it when I hit the starter button.

Only you don’t just hit the starter button in this Fiesta. First, you de-clunk the plastic door and turn right, as if you’re High Tower from Police Academy heading for the rear seats. This is the full DTM-style driving position and since Mr Block never intended for anyone else to drive it, the Recaro is fixed. Since I am somewhat shorter than Ken, this constitutes something of a problem. Five minutes later, with the padding from the passenger seat behind my back, I can at least reach the steering wheel.

Image is everything in Gymkhana-land, so this car feels like the strange love-child of Swedish Rallycross and MTV’s Pimp My Ride. Honest motorsport paraphernalia – toggles, buttons – mingle with deliberate jewellery, the most obvious of which is the enormous, monogrammed and slightly scary looking handbrake lever, which is quite unlike anything I think I’ve ever seen in a car interior.

The controls are simple. Toggle-on, press the starter, pull the carbon gear-paddle back to go up the gearbox, push it away (WRC-style) to go back down. In the centre of the dash, where there should be a nice digital clock, there now sits a large gear indicator. This looks like a sop to cinematography, but 650bhp will soon change that opinion.

Last night at dinner Ken told me that he doesn’t do shotgun rides ‘because they’re unpleasant’. I agreed emphatically, and I’m expecting Andreas Eriksson to jump in next to me, give me some pointers and ensure that I don’t slap it into anything that looks like concrete. Instead, something my old PE teacher would have categorised as a ‘fancy plimsoll’ enters the passenger footwell, followed by some snot-green overalls. Ken wriggles down into the now cushion-less seat and looks about as happy as I would if I was about to be hurled around by some bloke I hardly know. Belted down, he musters a grin and nods: ‘You’re gonna love it, just don’t crash it, I need to use it this weekend.’

But what to do with a 650bhp Fiesta on the infield of Irwindale Speedway? I don’t have much time in the car because it costs a fair whack to run, and we’re eating into the test schedule for Block’s inaugural Grid competition – a chance for drifters, rally drivers and other loons to destroy tyres against the clock. The course is laid out, but there’s no way I’m going to be able to navigate it with enough accuracy to avoid damaging the car or, more importantly, looking a complete idiot in front of the smattering of spectators.

The clutch is a bastard – avoiding a stall requires the delicacy of an organ player with your right foot and Scott Gibbs thigh-strength on the left side. I avoid the stall, but only just.  Rolling in first, there’s only one thing to do – find out exactly what 650bhp feels like in an 1100kg Fiesta.

Despite the enormous single turbocharger, boost initially builds according to your throttle input, then the whole car seems to make a great shrieking noise, a light flashes and you pull the paddle, as much out of relief as any desire to see what happens in second, and your brain registers a dose of back pain. For the record, the same thing happens in second, so you pull again. Your brain is so frazzled by the intensity of the experience that the gear-indicator acts as an LED comfort-blanket.

From a standing start, this is the fastest car I have driven. On slicks it has run 1.9 seconds to 60mph and even on these stock Pirellis it runs 2.4sec. This is mostly irrelevant though, because the Gymkhana Fiesta rarely spends much time using this titanic power to move forwards… as I am not about to demonstrate.

Second gear feels good for a skid, so I select an innocent-looking cone, approach it and pin the gas. Understeer. A second attempt: more understeer followed by a floppy tail-squiggle that peters out as the boost recedes, leaving me looking an arse. Thank God I can’t see Ken’s face. I stop and seek advice. ‘Carry more speed,’ he says. ‘You have to use the handbrake, and once the car is sliding don’t steer into it too much. The wheels kind of want to be straight ahead most of the time.’

Advice noted, I try again. Second gear, a reasonable tug on that slightly scary-looking handbrake and the car is immediately perpendicular. Instinctively you throw some corrective lock at the slide, then just pin the gas and feel the steering want to straighten itself. And there, as the car arcs around the cone and the motor screams, you happen across one of motoring’s better feelings. Drift equilibrium in the Gymkhana Fiesta.

I try again, only faster and with a bigger tug on the handbrake, hoping to reach the point of backwards-slide-nirvana, and it only goes and bloody works! Still in second gear, with the motor bouncing merrily off its electronic limiter, the car slews in completely the opposite direction, then begins another of its trademark, arcing slides. This is truly addictive, and for the next ten minutes I can’t help but yank the brake and ride ever smokier slides. No left-foot braking, in fact very little braking, just a tug on the lever and power. You know you’re beginning to get somewhere when the cabin fills with smoke.

So how does it make me feel about the video? Even more impressed. This car is an animal, and to drive it with the accuracy Block does requires ample helpings of skill and testicle. The real trick is in placement because the car accelerates so fast you have to anticipate where it will begin to slide – and in this respect I’m hopeless because I have to gradually slow the car to gauge this distance. I grab a passenger ride with Ken and he confirms as much, flinging the car into crazy shapes 50 yards before he actually wants to go around an obstacle.

So, will there be another Gymkhana car next year? ‘I don’t think so,’ says Ken. ‘This car does everything we need right now. It’s awesome!’ A car that was built to go backwards in a forwards gear: the very definition of awesome.