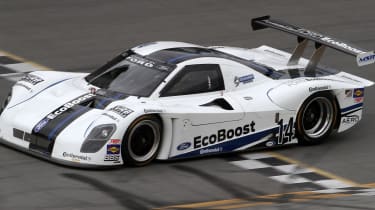 Ford has unveiled its new engine for next year’s inaugural Tudor United SportsCar Championship Series – which includes the famous Daytona 24-hour race. The engine package breaks away from the conventional V8 formula of the series, comprising of a new 3.5-litre twin-turbo V6 Ecoboost racing engine.

Ahead of next year’s season, Michael Shank Racing in association with Ford took the prototype to Daytona, in an attempt to take the lap record. Piloted by Colin Braun, the new car managed an average lap time of 222.971mph, beating the the previous record of 210.364mph, which has stood since 1987.

The engine is a development of the company’s road-going V6 Ecoboost engine – currently found in some of the bigger US-market Fords, including the F150. It’s also likely to feature in the next generation Ford Mustang, which is said to be coming to Europe. The engine comes out of the box with 365bhp, but has been developed for racing use by Roush Yates Racing Engines.

There are few details on the engine’s final specification – with Ford even remaining tight-lipped on the power output – but one of the first teams to sign an engine deal is Michael Shank Racing. The 2014 Riley Technologies Daytona Prototype, that the Shank team will race, has also received input from Ford on the aerodynamic side too.