The Ford Fiesta has overtaken the Escort, to become the UK's best selling car of all time. Details here 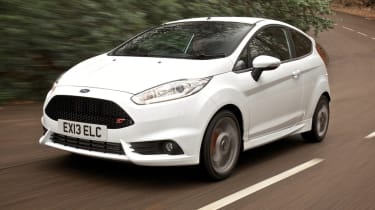 The Ford Fiesta has been ranked as the best selling car in Britain ever. The class leading B-segment hatch has now been bought enough times to enable it to overtake the Ford Escort, surpassing the discontinued Escort’s 4,105,961 sales with a recorded 4,115,000 as of July 2014.

First launched in 1976, the Fiesta has passed through seven generations. Much development of the Fiesta has taken place in the UK, with the current Mk7 having had all of its engines developed at Ford’s Research and Development Centre in Dunton, and Ford’s Dagenham Diesel Centre in East London.

This includes the 1-litre EcoBoost unit that has recently been named International Engine of the Year for the third year running, combining performance figures of 123bhp with 99g/km of CO2 and 65.7mpg. Even one of our favourite hot hatches, the Ford Fiesta ST, has its engine built at the Bridgend Engine Plant in South Wales.

The next best selling car in the UK at the moment, happily for Ford, is the Ford Focus. Vauxhall’s Corsa is then the UK’s third favourite, and represents the closest class rival to the Fiesta.