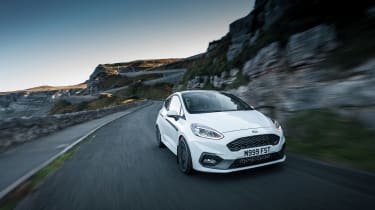 The new Ford Fiesta ST has already impressed us with its playful demeanour and impressive capability, but often the best Ford ST products have been those with the little yellow Mountune badge on the tailgate. We’ll soon find out if this is also the case with the current Fiesta ST, as Mountune has just announced its upgrade for the model, and not only does it offer the expected useful gains over the standard car in both power and torque, but the upgrade is easier to install than ever before too.

It’s called the m225 package, and as the name suggests, power has been raised to 225 metric horsepower – or 222bhp of the imperial variety we prefer here at evo – with torque up to 251lb ft. These figures represent increases of 28bhp and 37lb ft over the standard car, and result in a claimed 0-60mph time of 5.95sec (Ford claims 6.5sec to 62mph for the standard car), while a full second is slashed from the 31-62mph in-gear acceleration time. Serious numbers from a three-cylinder supermini hot hatch…

Mountune’s update also include a retuned augmented engine sound in Sport and Track modes, which works in conjunction with a new high-flow induction kit. The Launch Control setting has also been fettled, taking into account the higher power and torque figures.

The bulk of the added horsepower is achieved via ECU modifications, which are applied via an adaptor that plugs into the car’s OBD port. The tune can then be easily changed via a Mountune app that connects to the adaptor via Bluetooth. This allows owners to quickly switch between maps on the fly, and brings another advantage in the form of an anti-theft setting that, as you might suspect, immobilises the car for when you want some added security.

The software-only upgrade is available now for just £479.16, and no labour is required as the upgrade is a DIY job. The price rises to £662.50 with the induction kit, which can either be fitted at a dealer for an additional cost, or by yourself if you know your way around a screwdriver.