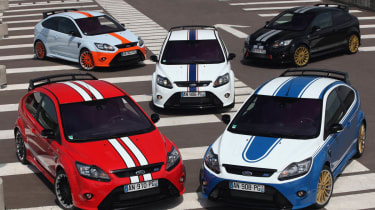 The Ford Focus RS hot hatch is a fairly divisive car at the best of times.  It may go like a scalded rat and put down its power like a 300bhp front-driver has no right to, but to some it also looks like it was designed with a DIY car modifying catalogue.

Ford have now thrown 99 octane onto the fire of debate by releasing a series of special edition versions of its ultimate hottest hatch, celebrating the company’s Le Mans heritage.  Five RSs have been decked out in paint schemes that ape famous liveries worn by Ford racers that have made history at La Sarthe, and will be displayed at Le Mans Classic on July 9 to 11 2010. The five specials will be driven round the famous circuit by Ford-invited VIPs and put up for public sale after the event. The Focus decked in black with white stripes and gold wheels apes the victorious 1966 Le Mans Ford GT40 MKII.  The Red car with white stripes and the white car with the blue centre strip advance the Le Mans tie-up by a year and respectively celebrate the MKIV and MKIIB GT40s pedalled in the 1967 race. The sky blue and orange car reflects the famous Gulf colours worn by the dominant GT40s of 1968 and ’69 (colours also synonymous with Porsche and, more recently, Aston Martin’s Le Mans racers). Finally the two-tone white and blue RS harks back to the Capri RS 2600 that won the touring category of Le Mans in 1972. Read about our John Barker’s drive in a Le Mans Ford Capri As well as the exterior work-over, the interior of each car reflects the colour scheme, and each car gets a personalised number plaque on the dash. These RSs were always likely to split opinion further. Is Ford carrying out a cynical marketing exercise or are these special editions paying a worthy and genuine homage to great cars and great racing drivers?  Let us know your opinions on the Forum…

Click for our review of the other special Focus, the Ford RS500

The Focus RS500 takes on Subaru Impreza Cosworth in evo 146