Ford's Go Faster – what's it like to be a stunt driver?

Part hooning around in fast Fords and part immersive theatre, Go Faster is a fun and surreal experience 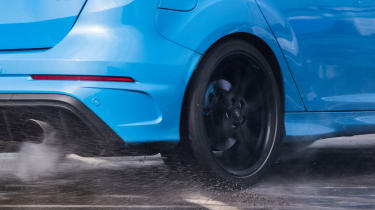 Being a stunt driver is one of those jobs that most, if not all, car enthusiasts would want to do. Purposely driving fast and recklessly, launching cars over train lines and smashing through gratuitously placed cardboard boxes sounds like the epitome of fun.

And, even if you really love cars, there's a perverted satisfaction at driving in such a way that might damage a car and not worrying about it. Disbanding any sort of mechanical sympathy in the pursuit of making a vehicle look exciting and dramatic is the sort of privilege that not many people can experience. 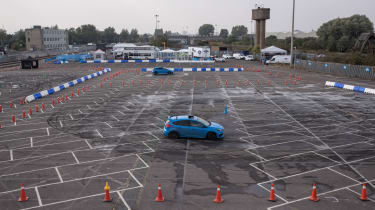 Hiring a car and paying for the full cover is perhaps the closest most of us will ever get to being a stunt driver. It might be thrilling to abuse that comprehensively covered Fiat Panda for a week, but none of your efforts will be filmed. But that’s no longer that case, with Ford’s Go Faster event you get to play the stunt driver for a few hours while a crew captures everything on camera for you.

The main focus of the event is to perform three manoeuvers in Ford Focus RSs and compete in a Ford Mustang. The tasks allow you to practice skills that you'd never need to use on the road but are essential on an action film set.

> Read our review of the Ford Focus RS

The entire event is held under the fictional pretense that you're auditioning for the non-talking role of a character called Wheels, a getaway driver in a new action film.

Ford has made up a set with a catering area, as well as production and wardrobe unit. There are also actors playing a director, producer, stunt manager and other actors. You're taken to get your costume (just a jacket and a pair of leather gloves), to get a headshot and do a screen test. The results – a film poster including your face, and a trailer featuring your driving and acting – are emailed to you at the end of the day. 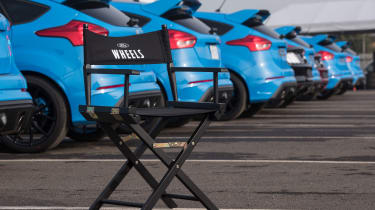 This all sounds a bit cheesy and, well, it is. But knowingly so. It's simply fun, nothing and no one is taken too seriously and it means even the least dramatic or shiest person can get involved without feeling a fool. Well, not any more of a fool than absolutely everyone else involved.

The event lasts for approximately three hours. That's not long, but there's a lot of action, and a lot of laughs, packed into that time. Plus, it only costs £99.

If you do plan to attend Ford’s Go Faster event, read our tips on each of the manoeuvers so you can turn up prepared and ready to impress. 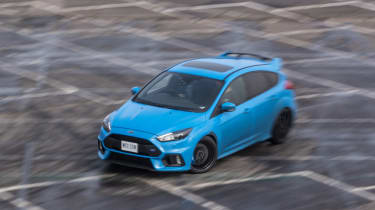 This action with the steering needs to be done as quickly as possible. So once the car is at a reasonable speed in reverse, between 15 and 20mph, you yank the steering wheel around and back as fast a possible so the car spins 180 degrees.

As soon as you start steering with your right hand, your left knocks the car out of reverse after you’ve depressed the clutch pedal and then selects first. Once the car is pointing in the direction of travel, rather than reverse, you let the clutch out and continue forwards. Be careful not to select third, because, although you’re moving forward, it’s too high a gear and the acceleration is far from dramatic. 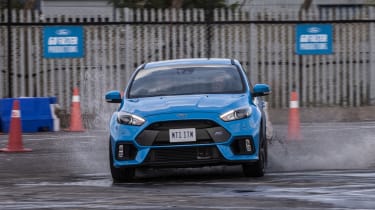 For this you use the Focus RS’s Drift mode to perform a large donut around an obstacle. All that’s required is for you to turn off the traction and stability control, select Drift mode and first gear and apply full throttle. Then, once you’ve launched forward, you turn around the obstacle to start a slide and then try to keep it sideways with the steering, never letting off the throttle. It’s not quite as easy as it sounds, as the four-wheel drive system reacts and tweaks the car's angle as you're trying to do so with the steering. As a result it can be easy to either spin the car or stop the slide if your movements are too exaggerated, and it works best with small steering inputs. 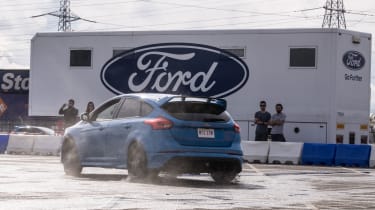 This isn’t really a powerslide, you’ll know it as a handbrake turn. The objective is to spin the car by locking the back wheel so it slides into a parking spot set out by some cones.

You need the same hand position as used for the J-turn, with your right hand on the left side of the wheel. But rather than turning the steering 270 degrees and back quickly, you just turn it 180 at a more leisurely pace.

After accelerating briskly, you turn right aiming for the middle of the parking space. While you still turning, and once the nose enters the bay, you ferociously pull on the handbrake. The only modification made to the cars is an uprated handbrake that can sustain such brutal use. It also doesn’t have a button and mechanism to hold it on.

If you’ve got everything correct – the speed, position of the car, the timing and you’ve pulled the handbrake hard enough – the car should pivot and park perfectly between the cones. It’s not quite that easy, though. Go too fast and you spin around too far and hit the cones, pull the handbrake too early or too gingerly and you just slow down rather than spin. Thankfully, you get to practice a few times. 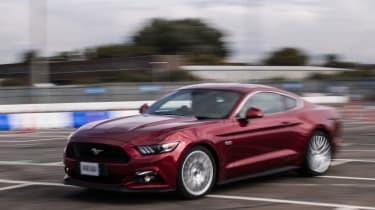 For this autocross-style event you swap into a Mustang. Don’t worry; it's the V8. This is the only one of the tasks that’s timed, so the only one that really matters. You have to race through a slalom set out by cones before pirouetting 360 degrees around two other cones.

> Find out what Ford's new Mustang is like to drive

Sadly the Mustang’s traction control remains on, so hopes of performing perfect donuts around the last two cones are dashed. The system is lenient enough, though, to allow you to kick the back out briefly to tuck the nose in. You get one practice run before you’re timed, and there are five-second penalties for every cone knocked over. The role of Wheels is then awarded to the person with the fastest time in The Shakedown.

Here is my trailer from the day, featuring some of my driving. It's safe to say that my stunts need some work, but not as much as my acting.