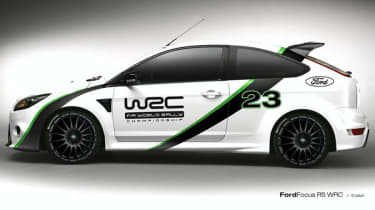 Ford’s characterful five-cylinder engine is to die. The 2.5-litre turbocharged appears in a number of Ford products, from the Kuga SUV and S-Max people carrier to the Focus ST and RS. Now that Ford’s cleaner and cleverer Ecoboost engines are on the scene, though, the writing is on the wall for the warbling five-pot. While it’s an engine we’ll miss – especially with its 2-litre four-cylinder replacement being much less endearing on first impressions – it’s easy to see Ford’s rationale behind the 2.5’s culling. The new Ecoboost engines are set to offer cuts of over 15 per cent in fuel consumption and carbon emissions while offering similar power and more low-down torque. And while the 2.5 engine suits the character of STs and RSs perfectly, its appearance in wider-appealing volume sellers has been a somewhat fruitless experience. The number of S-Maxes and Kugas equipped with it barely broke 100 units each in 2009, representing one per cent of each model’s overall sales total. You can still buy a Focus hot hatch equipped with five-cylinder firepower, with the RS likely to be the engine’s final application. And heading to the Geneva motor show next month will be a Focus RS special edition. The WRC will be limited to just 50 units, all for the Swiss market, with some OZ Superturismo alloys and exterior graphics the only key changes; power (300bhp), torque (324lb ft) and those frisky dynamics remain the same. What’s your thoughts on the death of Ford’s five-cylinder? Good riddance or a real shame? Head to the evo forum and let us know Read about Ford’s new 2.0 Ecoboost engine See the Focus RS take on its rivals on evo TV You can follow evo on Twitter or Facebook