How would the Mountune-fettled Focus ST compare against the stock Focus RS? Only one way to find out... 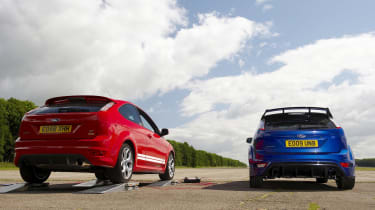 This has been in the offing for a while. Ever since Viv came back from having his ST Mountune’d he’s been itching for a straight-line dust up against the RS. His mood may have cooled after driving the hottest Focus at our recent ‘How fast?’ gathering (issue 131), but by that stage honour was at stake and there could be no backing out.

So a venue – Bruntingthorpe – was chosen, a date was set and the VBOX was primed. We even staged a weigh-in where we found that the RS is a bit of a porker – 82kg heavier than the ST to be precise (1476kg versus 1394). However, the power-to-weight advantage still lies with the RS (206bhp per ton plays 187), provided, of course, that the Mountune-equipped ST only has the claimed 256bhp. And Viv has suggested that the claim might be conservative…

I have a quick trot up the runway in the ST to size up the opposition. I come back flustered. Might be conservative eh, Viv? Might?! The character’s pure ST, but the delivery is distilled TGV. I resume my seat in the RS – I need its tight support right now.

Right now, though, I couldn’t care less about light throttle openings. In fact I’ve removed the carpets to make sure I’m getting all the throttle travel. In-gear times first, then, and a chance to let the RS flex its muscles. The engine note is deeper, tougher than the ST’s, the turbo emphasis more pronounced, the times pretty damn handy – only a few tenths shy of the Aston V12 Vantage through much of fourth gear. That’ll do.

Now for the proper stuff. 300bhp and a tight diff on Bruntingthorpe’s rough runway mean the RS tussles off the line, but once into second and then third (heavier shift than the ST, but identical gearing) it howls forward, nailing 6.0sec to 60mph and 14.4 for the ton. It feels quicker, but that should still be enough given that the standard ST takes 6.7 and 16.8sec respectively to reach the same speeds. Just how much more pace can your extra £1096 get you, anyhow? Ollie Marriage

I’m not sure about this. RS – big wing, scary nose, pumped arches, fat exhaust pipes. ST: rubbish white ‘ST’ stripes, puny yellow ‘Mountune’ tailgate badge, a few rumours, some started by me, that it’s more powerful than claimed. The smart money – and, if I’m honest, mine too – is on the blue car. Team RS wouldn’t have made it look that way if it couldn’t back it up with raw firepower.

After all, the RS is no mere ST with breathed-on turbo and engine management. Its stats are so muscular they should be smeared in baby oil. It has 300bhp at 6500rpm, 324lb ft of torque from 2300 to 4500rpm, bespoke pistons, crank and camshafts, a larger Borg Warner K16 turbo and all-new intercooler and exhaust systems.

The Mountune mods for ST, on the other hand, amount to a different air filter, a larger intercooler than the standard ST’s and an ECU remap. That’s it. Yet the claims for power and torque – 256bhp at 5500rpm and 295lb ft from 2500 to 4000rpm – look a lot more conservative than the claims for the performance, 0-60mph in 5.9sec and 0-100mph in 14.1sec being pretty much what Ford claims for the RS…

What unfolds at Bruntingthorpe is, to put it mildly, interesting. The bottom line is this – in a straight line at least, the Mountune ST is quicker. There are a couple of places where the extra top-end power of the RS makes itself felt – 100-120mph in fifth, for instance, where 6.7sec plays 7.4sec – but just about everywhere else the ST has it, and in some cases by an embarrassing margin.

From a standing start it holds its advantage all the way to 140mph, between 30 and 70mph it’s 0.3sec clear and in sixth it destroys the RS through the mid-range, taking over two seconds out of it from 40 to 60mph and still holding a half-second lead between 80 and 100mph. The RS would have clawed back some honour by recording the higher terminal speed at the end of Bruntingthorpe’s two-mile straight but for the fact that it carried 10mph more on to the straight from the bottom    corner, recording a peak lateral g of 1.03 against the ST’s 0.93. Clearly that butch body kit and big tailgate wing exact an aerodynamic penalty.

But it’s the difference in the character of the engines that’s perhaps most surprising of all. The RS feels punchier, harder-edged, peakier. The ST’s delivery is comparatively languid and has a little more lag – but once it hits 2000rpm there’s simply no stopping it. The bonnet rears up by a couple of inches and it pulls and pulls and pulls. And that sixth-gear flexibility is simply something else. By our reckoning, the Mountune ST must be pushing out at least 280bhp.

I’ll have pondered on all this by next month, but, for now, the news from Bruntingthorpe is RS 0, Mountune 1. Click on the performace comparison image. David Vivian