Can the Ford Focus RS500 cope with 345bhp through the front wheels? Ollie Marriage holds on tight. 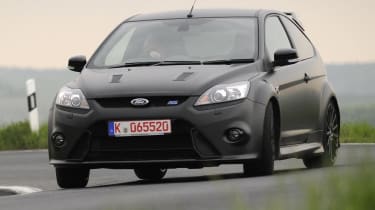 A Focus RS with added attitude – if such a thing is possible when the standard RS is perhaps the most pumped hot hatch of all time. Black wheels and matt black paint (it’s actually a film applied to standard black paint) do make it a terrifically mean looking thing. Of the 500 being produced, only 101 are coming to the UK, each priced at £35,750 – which as we shall see, is rather academic.

Since the only thing that’s been altered is the engine, that’s the highlight. The block and head have been left well alone, Ford simply adding a larger intercooler, air filter box and bigger bore exhaust downpipe to allow the engine to inhale more air, more quickly and then get rid of it more efficiently. There’s also an uprated fuel pump to make sure the air has enough petrol for the combustion process and the ECU has also been tweaked. The aim is better mid- to high-rev power delivery. With an extra 44bhp and 14lb ft over the standard RS, Ford claims the 0-60mph tumbles by half a second to 5.4sec.

The trouble for Ford is that the standard RS is a pretty bonkers thing and simply modifying the engine hasn’t fundamentally changed the driving experience, just given the front wheels even more work to do.

At low engine speeds the added power is largely undetectable, although the exhaust seems to burp even more readily when you lift off. But once the rev needle swings past 3500rpm you’re aware of extra pressure in your back, the engine feeling even more frantic in the way it piles on revs. There’s also a tad more volume from the exhaust and a greater repertoire of pops, bangs and whooshes. It’s highly entertaining and downright rapid.

As long as it’s dry the Focus is devastating. Yes, the wheel does tug, but it’s manageable (unless you’re in second and deliberately thuggish with the throttle), the diff doing a great job of getting the lion’s share of the 339lb ft to the floor. But in the wet the same isn’t true and the RS500 will happily, readily break traction in third. However, work at it and learn it and the Focus is able to make enormously rapid progress.

It’s never dull, not for a second, but neither is it particularly polished and it remains a hard car to drive smoothly. But for all that no hot hatch is as much of a blast to drive, and in the final analysis, that’s what matters.

The trouble is you get all this ability in the RS500’s closest rival, er, the standard Focus RS. Which, if you want, you can upgrade with this exact package of engine mods for £1995. Add it to a new car and you’d still get change from £30,000, which means Ford is charging over £5000 for the matt paint and the fact the RS500 is a limited edition. A bit cheeky if you ask us.

Of course, you don’t have to go down the Mountune route. We’ve driven a £435 Graham Goode Racing Focus RS with an ECU tweak and 340bhp and very good it is, too. If you’ve got £35,000 and a burning urge to blow it on hot hatch, then you can choose two other wildly different avenues. Go hard and track down a Honda Mugen Civic, or go soft and investigate a VW Golf R.

You can’t have one. It might cost £7,000 more than the standard RS, but all 101 British cars are already sold.