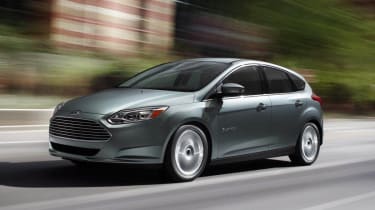 Ford has revealed its Focus electric vehicle. The Ford Focus EV is the first ever zero-emission production car to come from the global car giant. Aimed directly at the Nissan Leaf and Chevrolet Volt, the Ford Focus Electric was unveiled at the 2011 consumer electronics show in Las Vegas ahead of an appearance at the Detroit motor show. As with most EVs, power for the Ford Focus Electric comes in the form of lithium-ion batteries that re-charge from a home charging station. The battery power allows the electric Focus to be whisked to an adequate 84mph.Whilst a range figure has not been announced, Ford claims that the Focus Electric will have a ‘mile-per-gallon equivalent better than the Chevrolet Volt’ - the Volt achieves a combined 72mpg. It will also have a charge time half that of the Nissan Leaf’s eight hours. Inside, the Ford Focus Electric benefits from technology unseen in the standard car. Most notable is the MyFord Mobile smartphone app. Developed in conjunction with Microsoft, the app allows Focus Electric owners to charge their car remotely and monitor its state of charge.  Whilst suspension and chassis components are largely unchanged from the petrol and diesel variants of the third-generation Ford Focus, the EV benefits from some cosmetic tweaks, most noticeable being the larger Aston Martin-esque front grille. The Focus Electric will also benefit from 17in alloys and sat-nav as standard. The Ford Focus Electric will be officially launched in late 2011, with deliveries in Europe and North America in 2013. The price of Ford’s first EV has not yet been announced, but expect it to be priced to compete with the Nissan Leaf, which comes in at £23,350 after the UK government’s £5000 grant.