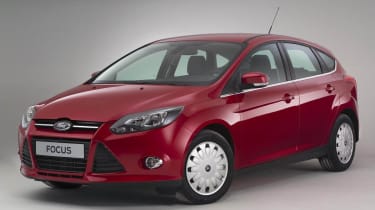 Ford has announced an Econetic version of the new Focus which will be capable of 80mpg and will produce just 95g/km of CO2. The new car, which will debut at next week’s Amsterdam motor show, will set a new benchmark for fuel efficiency in its class. Powered by a 104bhp 1.6-litre Duratorq TDCi diesel engine, it uses a new injection system and turbocharger as well as enhanced air cooling and friction reduction measures including low-friction piston ring coatings and a variable flow oil pump. A six-speed, Durashift manual gearbox with a revised final drive ratio and low friction transmission oil also helps to reduce fuel consumption along with underbody aerodynamic improvements, an Active Grille Shutter, Ford Auto-Start-Stop, a shift indicator light and low-drag Econetic wheel covers and tyres. ‘The Focus Econetic is a testament to our company's relentless drive for technological innovation and commitment to environmental leadership,’ said Ford's global medium car line director Gunnar Herrmann, ‘It's also going to be a great car to drive.’ We’ve driven some great ‘economy specials’ in recent times, the 109g/km BMW 320d ED and 99g/km Mini Cooper D proving that cars can be cheerful and cheap to run. The Focus Econetic will be available as a five-door hatchback and a five-door estate when it goes on sale in the UK early in 2012.