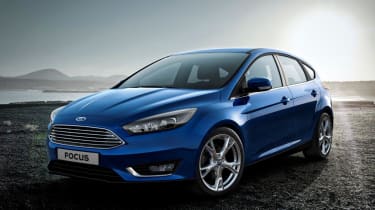 Ford has confirmed the prices for the new Ford Focus ahead of its arrival in showrooms this November. Unveiled at Geneva earlier this year, the facelifted focus avoids a price increase to start from £13,995.

The revised model gets a raft of changes, most noticeable of which is the new chrome grille. The whole bumper is new, as is the lower bonnet, which compliments a new slightly slimmer headlight design. The rear also gets slimmer lights and a revised tailgate design.

Engines across the range have been re-tuned, and now boast some of the cleanest and fuel efficient numbers in its class. The entry-level 1.0 EcoBoost is now available with a sub-99g/km. Two new engines include a 1.5-litre EcoBoost petrol, in both 148bhp and 177bhp state of tune, as well as a new 1.5 TDCi with either 94bhp or 118bhp.

Ford says that it has reworked the Focus under the skin too, with increased body stiffness at the front, different suspension geometry, stiffer steering bushes and new shock absorbers. This is said to improve the handling, with a more ‘solid, responsive and connected-to-the-road feel’.

The interior has been significantly fettled too, with a new and much larger eight-inch central screen. It will be the first European Ford to be offered with the new and improved SYNC 2 voice recognition system, apparently much more natural than earlier versions. The manufacturer has also responded to customer feedback by reducing the amount of buttons, and creating a simpler layout.