Neat remapping swells the appeal of the excellent ST 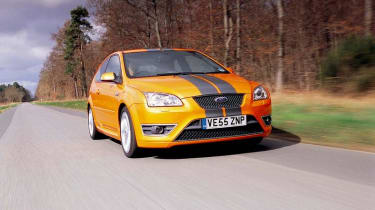 Bluefin. A curiously evocative name, suggesting high quality (as in blue chip), stealth (as in a shark's dorsal fin), and Ford too with its blue oval. All fitting connotations for this £499 Superchips engine upgrade system, available for an array of turbocharged petrol and diesel-engined Fords, to which the new Focus ST is the latest addition. We first tried Bluefin on the Focus RS back in issue 55, and since then the presentation of the package has improved. The programmer, which allows you to upload the enhanced engine map or restore the factory settings, was originally a nerdy, square-edged device but is now a more rounded, tactile and altogether more attractive affair. Using Bluefin remains simplicity itself. From the comfort of the driver's seat you simply plug the programmer into the standard-fit diagnostics socket (in the Focus ST this is located in a facia cubby hole), follow the simple instructions on the programmer's LCD display, and in less than five minutes the ECU is re-configured. The bottom line on the Focus ST's 2.5-litre five-cylinder turbo engine is an uplift in power from 222 to 255bhp, and torque up from 236 to 273lb ft. However, the bottom line isn't the most impressive aspect of this remap; the gains are at their greatest in the 3500-5500rpm range, where Bluefin delivers up to an extra 40bhp. Compared with the standard curve, Bluefin not only produces a higher peak, it also sustains it for longer before the turbo boosts ebbs away. Superchips offers a seven-day money-back guarantee, and switching between the maps is so easy that you can easily conduct any test you wish to determine if you've made a wise investment. It reflects well on the Focus ST that its chassis copes easily with the greater power and torque on offer. The mildly warbling five-pot engine still comes on boost very progressively but there's an appreciably heftier shove when it does. Also, the small hesitation that the standard car has when you snap open the throttle at around 3000rpm is smoothed over with the Bluefin map. So capable is the ST's chassis, and so smooth and progressive the enhanced delivery, that switching out ESP and driving the same road with both programs provides the best demonstration. With the standard map, when you nail the throttle out of tight, second-gear turns, the inside front wheel will overspeed only slightly. Like we said, the chassis is very good. Try the same road with the Bluefin map installed and the ST will remain composed and on line but its inside tyre will spin and smoke unless you modulate the throttle a fraction. In a straight line, there's simply more urge for overtakes. It works, then, and unlike the Focus RS which really doesn't need more power to make it more exciting, the less edgy, almost laid-back ST seems to offer scope for much greater increases in power and torque. Indeed, the sneak preview of things to come that we enjoyed when we visited Superchips confirms that Bluefin is just the start, and that the Focus ST will cope comfortably with substantially more power. Stay tuned.