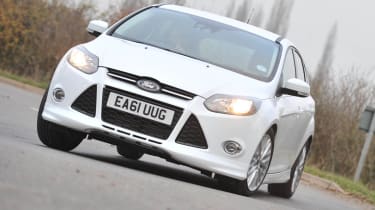 What is it? The Ford Focus Zetec S, a new sporty trim level for the best-selling hatchback. We’ve driven it in 179bhp 1.6-litre Ecoboost form – the feistiest Focus you can buy, until the 246bhp ST hot hatchback arrives in 2012. Technical highlights? Dynamic tweaks are few – some stiffer springs and dampers – with the bulk of Zetec S modifications being cosmetic. A subtle styling kit, new 17in multispoke alloys and a striking new look for the dashboard are the main changes. The engine is exclusive to the Zetec S for now, and is a preview of the largely similar unit that will power the forthcoming Ford Fiesta ST. Signs are promising, its healthy 177lb ft torque figure rising to 199lb ft on overboost, available over a 2100rpm range. Mid-range shove is as punchy as we’ve come to expect from modern turbocharged petrols, but the Ecoboost’s eagerness to rev is more surprising – it’ll sing past 6000 revs with an appealingly bassy noise in tow. What’s it like to drive? With its keener suspension setup, the mk3 Focus feels tauter, cornering with little roll and exuding great balance and body control. The steering is very quick, perhaps more so than you’d like considering its lack of feel (thank the shift from a hydraulic to electric setup), but once you’ve got accustomed to it, you’ll get a real flow going over Britain’s twisty and choppy B-roads. This is helped along by a compliant and well-judged ride that shames most other sporty hatchbacks. The engine feels worth its 179bhp, and it’s a pleasing thing to work hard. Shame the six-speed manual transmission boasts such long ratios – with torque so abundant, you can easily shuffle through the gears, but this denies you the fun of hanging on to every rev. Though consistently doing so will see your mpg figure tumble into the low-20s (from a claimed 47.1mpg). Those who remember the magic of the mk1 Focus and its unlikely agility will find this mk3 iteration lacks such sparkle, but that doesn’t stop it being dynamically capable. How does it compare? Closest warm hatchback rivals are the Vauxhall Astra GTC 1.6i SRi (£21,480, 178bhp, 169lb ft) and Volkswagen Golf GT 1.4 TSI (£21,310, 158bhp, 177lb ft). The former is more fun to drive than the Focus but only has three doors, while the latter is as all-round capable as cars in this class get but lacks a little excitement. Anything else I need to know? Zetec S trim is available on a range of petrol and diesel engines, twinned to manual and automatic gearboxes, with prices ranging from £18,745 to £22,595. And unlike its VW and Vauxhall foes, there’ll be no three-door Focus, so this is as stylish as things get.