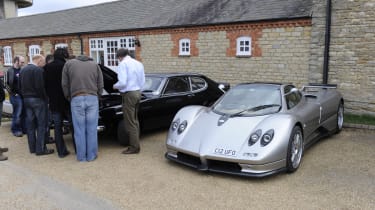 There you go, then,’ said Nathan Bovingdon as he handed me the keys to the Capri in the workshop at the Paragon MoT & Service Centre, Northampton. We had just worked out that I had handed the keys to him a full year ago. Wow. A whole 12 months for an engine rebuild necessitated by a slight but persistent oil leak that I had not realised had dropped the level to beyond the furthest reach of the dipstick. Bugger.

Then again, I’m not at all surprised it took so long because where the Capri is concerned time slips by as easily as a buttered hog on a water slide. I can never escape exactly how long the Capri has been in the making either, because I was hoping to have it finished before our firstborn came along. For the record, this month Evan is seven. Happy birthday, son. So I’m not surprised that Nathan and his dad Roger have been pushing the Capri in and out of their workshop through winter, spring, summer and autumn. Despite that, they both say they still love the car and always comment on how much attention it attracts.

One reason it was with them for so long was that when it went back together it wouldn’t run right. Turns out the timing markings on the big-capacity Rover V8s built by TVR Power in Coventry are not the obvious ones. Cue time-consuming (natch) partial dismantling.

‘We’ve given her another MoT, put a bit of fuel in and run her round the block – she feels really sweet,’ said Nathan. ‘Bring her back when you’ve done 1000 miles and we’ll change the oil.’ Then he added with a laugh, ‘See you in about a year, then…’

This year will be different, I told myself back then in January. I will get the final jobs and niggles sorted. I will buy a period three-spoke RS steering wheel and I will find a black door card for the driver’s door. More importantly, I will get a front anti-roll bar (adjustable) made for it so that I can finally get the handling sorted.

I drove her home, gingerly, and she did feel sweet. When I got there I popped her in the garage, having first spent an hour making room for her. One Sunday a month later (ahem) I fired her up to make sure the battery was OK. She caught first time and filled the garage with the noise I had wanted to own: the dreamy, deep, soft-edged pulse of 5.3 litres of V8. Choked, I was. Probably should have opened the doors first.

A couple of weeks ago, Monday dawned dry and bright, so I left the key to my Jag long-termer on the hook, threw open the garage door and fired up the Capri again. A few miles down the road it felt marvellous. I stopped to refuel and, as so often happens, a middle-aged bloke wandered over for a closer look and a chat, which revealed, as it so often does, that he used to have one. Then, back on the road, in fact at very the roundabout where the engine had run its main bearings over a year before, there was a noise I didn’t want to hear. As I pulled away there was a not too loud but distinct knocking that sounded quite like a knackered main bearing. My heart sank. ‘Noooooo!’ I screamed inside my head, but each time I accelerated there it was.

There had been a spot or two of oil on the garage floor but no more. I gassed it and looked in the mirror but saw no smoke. Perhaps, I allowed myself, it was a loose bit of exhaust. Arriving at the office I parked next to Harry’s Zonda (momentarily wondering if it was ‘bring your toys to work’ day), popped the bonnet, gave the idling engine a blip or two and, thank goodness, found there was a loose bolt on the left-hand exhaust manifold.

I was relieved, especially as by this time a few of my colleagues and most of the chaps from the Octane office across the way had come out to see the thing, ignoring Harry’s gleaming, low-slung overdraft.

So, just a bit of settling in, then. Only to be expected when you’re still waiting for the odometer to reach 1000 miles after seven years…