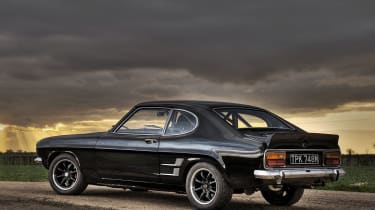 A car with steam kettling from under its bonnet is a rare, almost nostalgic sight these days. A couple of months ago there was a boiling car at my local filling station and it took me a moment to realise it was mine. Arse.

With as much nonchalance as I could muster I filled up with fuel while the Capri made a hot puddle. By the time I’d paid and rolled it to the air and water bay, it had stopped hissing.

I twisted the header tank cap a little and was surprised when it shot past my fringe, closely followed by a quart of hot fluid. I wasn’t expecting that – I thought it had already expelled most of its coolant. Thankfully the dousing  only made my forehead a bit red rather than melting it off.

Back home the radiator seemed to get evenly hot but no liquid would come out of the bleed valve in the uppermost hose, so it looks like either the thermostat isn’t working, there’s an airlock or the water pump is kaput. What fun.