Was the Ford GT40, rather than Lamborghini’s Miura, the world’s first supercar? 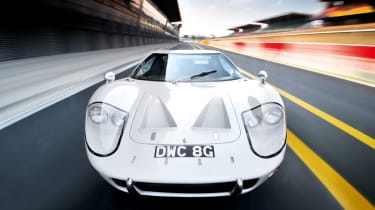 Born out of an almighty falling-out between Henry Ford II and Enzo Ferrari, the GT40 in its various guises won Le Mans four times between 1966 and 1969, and the roadgoing versions can lay serious claim to being the world’s first supercars as we now understand the term.

Ford was determined to win Le Mans, and when a mooted takeover of Ferrari fell through, it turned to the British company Lola to develop a mid-engined Ford-powered endurance racer. There were several variations over the years, with engines ranging from 4.2 to a mighty 7 litres.

The MkIII version from 1969 pictured here, which John Simister drove for evo’s tenth birthday issue back in 2008, was the closest the GT40 came to being a genuinely useable road car, although it was still very much a racer at heart.

Even with its 5-litre V8 in a fairly mild state of tune, the MkIII is still a serious performance car. The ZF gearbox is co-operative, the twin-plate clutch properly progressive, the ride and noise levels just about acceptable for a drive down to Le Mans…

Squeeze the throttle hard and there’s a bellow somewhere behind, the Ford squats its tail and leaps forward, accelerating hard well into three-figure speeds. Despite appearances, it’s a small car, which makes it a terrific overtaker, with a sound barrage to stun all opposition. This road car had a top speed of around 165mph; the racers regularly broke 200mph on the Mulsanne straight. When John Simister drove the mkIII around the famous circuit, he found its handling first-rate, the steering quick and full of feedback, just as you’d hope.

Just 107 GT40s were produced and the originals – much copied – are among the world’s most sought-after classics. Whether it was the first supercar is still debated, but what a machine.