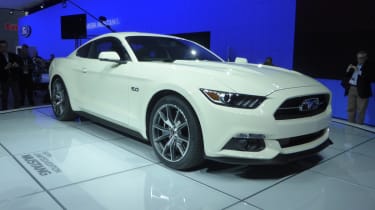 Ford has unveiled a limited edition Mustang to celebrate 50 years of the original pony car. The Mustang was originally shown to the public in New York at the 1964 World’s Fair, so Ford has chosen the 2014 New York motor show to celebrate the five decade anniversary.

The new 50 Year Limited Edition has basically every option available, so the only choice customers will have to make is whether to have it as a manual or automatic and whether to go with Wimbledon White or Kona Blue paint. Both the body colours are exclusive to this limited edition, with Wimbledon White being the colour that the very first Mustang (sold to Captain Stanley tucker in April 1964) was painted.

Apart from the special colours, there are various other external highlights that mark the car out: Louvers in the quarter light windows, chrome at the base of the tail lamps and a large ‘gas cap’ badge with 50 Years printed on it on the rear. Inside, each car gets a uniquely finished aluminium panel on the dash along with an individually etched badge. There is also extensive use of cashmere stitching in the exclusive upholstery.

Mechanically the limited edition cars will all come with the upgraded 5.0-litre V8, putting out more than 420bhp and 390lb ft or torque. Each car also comes equipped with the Mustang GT Performance Pack, which includes six-piston Brembos and 19-inch wheels. The limited edition is the only 2015 car where the performance pack can be specced with an automatic gearbox. The look of the alloys also harks back to the 1964 Mustang with a special Y-spoke design recalling the original’s chromed steel wheels.

Just 1964 examples of the 50 Year Limited Edition will be built when production begins later this year. Sadly we fear they will all be left-hand drive even though the regular Mustang will be available in the UK with right-hand drive for the first time. 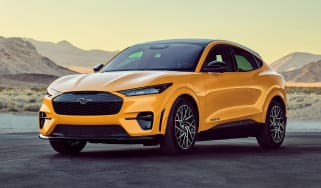