750bhp Mustang to celebrate 50 years of the Super Snake

Shelby upgrades the latest Mustang with supercharger and uprated chassis 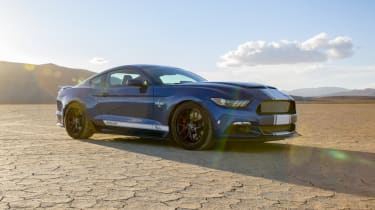 To celebrate fifty years of the Super Snake name, Shelby has released an anniversary model of the Ford Mustang. The new supercharged Super Snake will be limited to just 500 models but will be available globally with the package starting at $36,795 (£29,854).

The Super Snake name was first applied to a 1967 Shelby GT500 prototype fitted with a 7-litre V8 from the Mk2 GT40, but the project was scrapped when Shelby realised the final car would be too expensive.

The name was revived a year later when it appeared in a classified ad for a twin supercharged Cobra Mustang being sold by Shelby. The name didn’t appear again until 2007 when Shelby offered a Super Snake upgrade for the GT500 that increased power to either 600bhp or 725bhp.

> Click here to read our review of the new Ford Mustang

The new Super Snake follows a similar principle. It’s based on the existing Ford Mustang GT with either a manual or automatic gearbox. Its 5-litre V8 is then supercharged to give it 670bhp. If that doesn’t sound like enough power then you can specify a higher rated supercharger that bumps it up to over 750bhp. This means the Super Snake can accelerate from 0-60mph in 3.5sec or, more appropriately for a muscle car, complete the quarter mile in 10.9sec.

The Super Snake isn’t only about straight line pace though, as the chassis has been treated to some suitable upgrades. The dampers, springs, anti-roll bars and bushes have all been retuned to Shelby’s specification. The brakes have been improved too, and the Super Snake has six-piston Wilwood calipers and floating discs up front with four-piston calipers at the rear. These are covered by 20-inch wheels and high performance tyres. 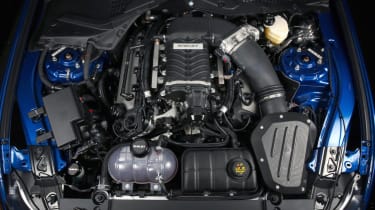 The front bumper has also been redesigned to channel more air to the new brakes to keep them cool. As well as the reprofiled front end, the Super Snake has a new bonnet, sills, rear bumper, grill and foglights. It comes with central stripes as standard, but you can chose not to have them if you wish. However, the stickers down the sills are mandatory.

Anniversary Shelby logos appear on the outside of the car as well as on the seats, floor mats and door sill plates. Each Super Snake is also given a Shelby serial number that is then documented with the official Shelby registry.

As well as the 750bhp-plus upgrade, there are plenty of other ways to further improve the Super Snake. You can choose to have shorter gears, uprated drive shafts, a short shift kit, coil overs, a roll cage and stronger wheel studs, should you so wish.