Artega Scalo Superelletra by Touring to debut in Geneva 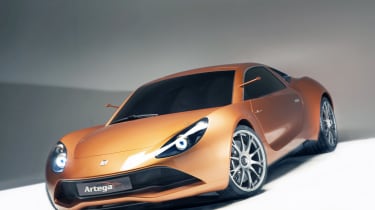 Artega is one of several automakers presenting a new electric supercar at the Geneva motor show, in the form of the Scalo Superelletra.

The German manufacturer, which has had chequered history since it debuted in 2008, has commissioned Italian coachbuilders Carrozzeria Touring Superleggera to style the Scalo Superelletra. Just 50 examples will be made when production begins in 2019.

Full details are yet to be confirmed, but our sister title Auto Express cites reports suggesting the supercar will develop up to 1006bhp, and 1195lb ft of torque from a quartet of water-cooled electric motors. Given this setup, we'd be surprised if the Scalo Superelletra didn't use some kind of torque vectoring to aid handling.

A 0-62mph sprint of 2.7 seconds is rumoured - 0.9 seconds quicker than the regular Scalo - and a 186mph top speed, up from 155mph. The other important electric vehicle figures, range and recharge time, are claimed to be 311 miles and 17 minutes for an 80 per cent boost.

The Superelletra's styling also moves the game on from the regular Scalo. Carrozzeria Touring Superleggera's previous projects include the stunning Disco Volante and pretty Mini Superleggera roadster shown in recent years and the striking Artega supercar follows in those footsteps.

Notable are the use of rear vision cameras rather than mirrors (whose pods do look a little like insect antennae) and a fastback-style roofline that belies a McLaren F1-style seating arrangement, with the driver centrally positioned and passengers further back and to each side.

Production plans are yet to be confirmed but it's expected that the aluminium and composite bodywork would be built by Touring in Italy, but full assembly would take place at Artega's facility in Delbrück in north-western Germany. Pricing too is uncomfirmed, but is likely to be in the £850k-£1.3m range.