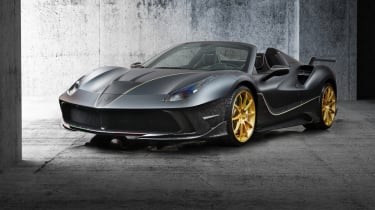 Custom car specialist and official supplier to those with more money than taste, Mansory, has revealed eight new vehicles at the 2017 Geneva motor show, based on everything from the Ferrari 488 Spider to the commodious Mercedes-Benz V-class MPV.

The first of these will surely attact most attention. Mansory's 4XX Siracusa Spider is described as a 'fully overhauled' Ferrari 488 Spider and, while among Mansory's subtler supercar transformations, will still be as divisive as ever to those with a fondness for the original Ferrari.

The German firm has made significant changes to the original car's form, most notably to the front and rear bumpers. It's difficult to judge the functionality of such devices, but Mansory claims the front intakes aid cooling while the lower lip is beneficial to downforce, while there's a new diffuser element and two Pagani-style rear wing elements at the back. 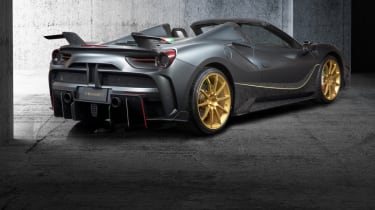 Several of these components are formed from carbonfibre, and they're joined by larger side skirts and an extension to the 488's side intakes, said to guide more air towards the engine. Tweaks to the engine management and a new exhaust system lift power to 779bhp and torque to 642lb ft, against standard figures of 661bhp and 561lb ft.

A 0-62mph sprint of 2.9sec is claimed (a tenth quicker than standard) with a 212mph top speed, a gain of 9mph. New springs lower the car by 20mm on 20-inch front and rear wheels, while the cabin also sees changes, with a striking retrim and multiple carbonfibre elements.

SUVs are big news at this year's Geneva show and Mansory's stand continues the theme. We've become almost numb to reworkings of Mercedes' bellicose G-wagen in recent years, but not to the Bentley Bentayga nor Maserati Levante, each of which remains at Mansory's mercy. 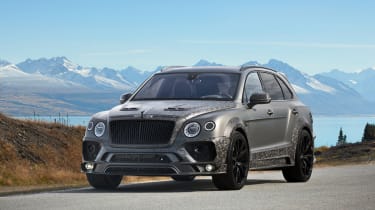 The former is probably most offensive to both eyes and sensibilities, dubbed Mansory 'Black Edition' and featuring 23-inch wheels, a prominent bodykit and a carbonfibre bonnet, many elements of which appear to be wrapped in a granite-effect trim on the show car. Work to the engine is impressive, if only because Mansory has liberated 691bhp and 774lb ft from Bentley's familiar W12.

With no hint of irony, Mansory says of its take on the Maserati Levante - a car named after a moderate easterly wind - that its changes are 'more like a hurricane'.

The orange paint is clearly not obligatory, which should give buyers a chance to tone down its exterior and its orange-spattered cockpit. There's even something to be said for the bodykit, which improves the Maserati's proportions albeit at the expense of subtlety. 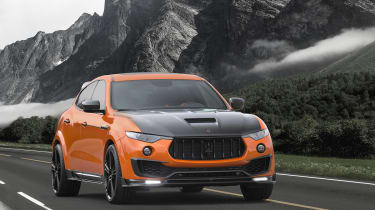 The car's carbonfibre elements are made in-house by Mansory and it wears 22-inch wheels which neatly fill the arches. The twin-turbo V6's power rises by 34bhp thanks to ECU tweaks, a new air intake and a new exhaust silencer.

Porsche is launching one of Geneva's most appealing cars in the shape of the new Panamera Sport Turismo, while Mansory has gone to work on the standard car. Once again, a more toned-down colour combination would probably help this one, but with 22-inch wheels, GT3 RS-style front wheelarch vents and intricate front and rear bumpers, subdued it is not.

Elsewhere, Mansory has revealed new takes on the Mercedes-Benz S-class cabriolet, the Rolls-Royce Dawn, and Mercedes' practical V-class, though each is almost restrained in comparison to the others. You can examine each in more detail in our gallery images.