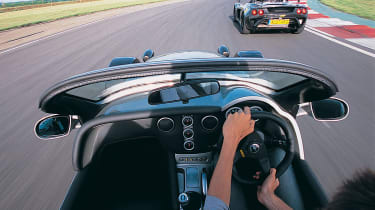 The original 1961 Elfin Clubman had more than a few elements that Colin Chapman would have recognised whilst the Series 3 was a Caterham’s identical twin. Today’s MS8 Clubman looks like a CSR viewed though a glass of water, and with its butch Generation 3 LS1 V8 and Monaro running gear, is somehow the perfect Aussie mutation of a Lotus. By comparison, the 2-Eleven is the ultimate Lotus mutation of a Lotus – lighter and more uncompromising than ever.

The two cars are clearly going to offer different kinds of thrills, but on paper alone it’s hard to say which is the toy that grown-up children will want to play with until the batteries run out. Bedford Autodrome is our playground, the B660 our sitting room floor…

Slide down into the Clubman’s cockpit and you find yourself in a curious environment. The seats are fantastic; comfortably squashy yet so secure that you almost feel no need for a seatbelt. The well-finished dashboard is upright and the steering wheel presents itself quite high up, facing your sternum. The gearstick is also a tallish affair with a small Elfin badge set into the top of the polished ball. Everything feels solid and it encapsulates you more than you might imagine for a small, open-sided car. The one disappointment is the lack of a view down a sweeping bonnet to two gently bobbing wheels. You might as well be sitting in a people carrier for all the impression you get of where the nose ends or the front left wheel is.

Fire the big V8 into life, however, and you’ve got enough muscle-car atmosphere to make up for the lack of view. Select first – the clutch and gearshift of the heavy duty Tremec T56 ’box are not for the dainty of ankle or forearm, but that’s not surprising given the gargantuan 343lb ft of torque they have to work with – and the Clubman moves easily away on barely any revs. The throttle is of the TVR long-travel variety but even a half prod raises the nose, squats the rear and fires you down the road with all the organ-compressing lunge you’d expect from a ridiculous V8 tucked into a small spaceframe chassis. Even accounting for the slightly optimistic speedo the Clubman reaches three figure speeds on the shortest of straights or after the briefest of overtakes. The claimed 4.2-second 0-62 certainly seems plausible.

Luckily, despite the draught, there isn’t much danger of getting cold as the heat soak from the V8 gently roasts the rest of the unventilated cockpit. It’s all good fun though, blasting between the hedges in a ‘tally ho’ Vintage Sports Car Club kind of way. The ride is excellent too, with bump absorption especially impressive given the 18-inch wheels that seem to be on an exchange programme from a concept car.

Then you arrive at a corner and everything starts to get a bit less fun. First you must deal with the firm pedal of the unservoed and not entirely confidence-inspiring AP Racing six-pots. Then you find the engine needs attention too – mistime a heel and toe (quite easy with the long throttle) and the rear wheels chirrup as they momentarily lock and unsettle the rear. Finally you have to grapple with the Elfin’s biggest curiosity – an amazingly slow steering rack. To look at the Clubman you would expect wrist-flick direction changes, but try that in a corner and you’ll sail merrily on into the verge with not so much as a waver from the straight ahead. Winding big chunks of lock on and off is the order of the day, preferably with some help from the rear end. Despite being unassisted, the steering is also too light around the dead-ahead.

After a while you do relax and, although it never feels entirely right, you just start sliding the rear gently (and I do mean gently, for reasons we’ll come to in a bit) through every corner. Turn off the rather abrupt traction control and you can actually hear the rear tyres breaking traction next to you, frequently some time after you’ve returned to the straight ahead, which certainly holds your attention…

No windscreen, so the view over the plunging, razor-sharp front arches is from inside a helmet. The big red aluminium blister to your right spins the four-cylinder into life, resonating through the chassis in a lightweight, tinny fashion. The Aussie certainly has it licked for aural presence. Everything in the 670kg Lotus seems almost frail after the Elfin too; the fragile wand of a gearstick sprouting from the tiny tunnel on the floor, the steering that’s almost limp in your hands, the three delicate pedals. It genuinely feels lighter than any other Elise too, which is some achievement, and approaching the first corners you almost wonder if there’s enough mass over the front Yokohamas to generate any grip.

Despite this particular 2-Eleven being in road trim, it’s still leaning towards track-stiff and the very lowest grade of back-road can make it feel slightly skittish. Once we reach the slightly smoother tarmac of the B660, however, the Lotus really starts to shine. With just half the torque, the Lotus’s straight-line punch isn’t in the league of the Elfin, but deep into the revs of third and fourth gears its endless reach seems to suck you along as though gravity has re-polarised and you’re falling towards the next corner. The noises get more interesting on the move too; a harsher twin-cam bark than an Exige, accompanied by a cool F1-style barp-barp-barp whenever traction control cuts in and stifles the engine.

Then you brake and, as Motoring Ed Barker says, ‘it feels like you’ve got eight-pot carbons’. The reality is actually Lotus’s most basic stoppers – twin pots that look like little baby brakes that broody women might coo over – yet they work astonishingly. Gone is the sloppiness of the Exige’s middle pedal, replaced with an accuracy and freakish strength that turns braking into a game of chicken that the car always wins. They’re matched only by the 2-Eleven’s corner speed.

Given that it was originally called the Circuit Car, the black and yellow Lotus with the big front splitter really ought to be pretty good. And it is. A lap time of 1:21.10 around the West Circuit is faster than a McLaren F1 and right up there with the Caterhams and Atoms of this world, which is a staggering achievement. ‘The balance of it all, the perfect matching of power to grip to handling, is superb,’ says Barker.

With 73bhp more than the most powerful Caterham, the Elfin has more than a good chance of muscling its way in at the top of the table too. But by the time we exit the hairpin for the first time, it’s clear that extracting a good time isn’t going to be easy. The brakes appear to be cold, then hot, then fading and then finally ABS-less (even though it’s meant to be fitted). Then as we turn into the left-hander the tail starts swinging on a trailing throttle. It’s snappy mid-corner too. If you can temper the slide with a small amount of opposite lock then it’s just a waiting game as the power v slip ratio naturally decays, but if the slide gets lairy you’ve got a real problem because the 265/35 ZR18 rear tyres mean progression isn’t on the agenda. Throw in that HGV steering and surprisingly shallow lock and you’ve got Mk1 Clio V6 issues. If you need more than half a turn of the wheel you’ll probably spin, but if you don’t then watch out for the tank-slapper as it straightens itself out and you struggle to whip the lock off quickly enough. Gordon Ramsay probably uses blunter knife-edges.

Even if the Elfin didn’t turn in a Lotus-beating lap time (it does weigh 230kg more after all) we had hoped that it would at least be fun on the track, but the end result is a 1:26.60 and a very puzzled Barker, who’s standing in the pits, just shaking his head. ‘If I lapped all day I might go as much as three seconds quicker, but it’s probably the most difficult car I’ve driven around the West Circuit. What the f**k is it like in the wet?’ Quite.

Sitting side by side at the end of the day it’s unfortunately obvious which toy’s about to get chucked out of the pram. It’s always exciting when a fresh name enters the sports car market, flagging up the potential for a new hero. If it’s got a 329bhp V8 in its nose, even better. But whilst it’s fun at six or seven tenths on the road, the Elfin still needs some work to unleash its full potential. I suspect the acres of rubber were meant to aid traction and the slow steering was designed to stop you unsettling the car, but I’d rather have less grip and a car that you can slide, like a Caterham. Since Elfin’s masters at TWR sorted the flawed Clio V6, I’m sure they can do the same here. We’ll keep you updated on its progress.

Because of its origins the Lotus 2-Eleven may not evoke the same buzz as a completely new car, but that makes the excitement it generates when you drive it all the more surprising and special. If you want playful, then a Caterham R4 00 still has the edge. But if you drive on both road and track and want Radical-style adrenalin hits from shockingly high dynamic limits, then the Lotus is the toy to have in your garage. It may not have the looks of a 340R or an Exige and it may be a lot of money, but this is simply the best car ever to use the Elise’s bonded aluminium chassis.