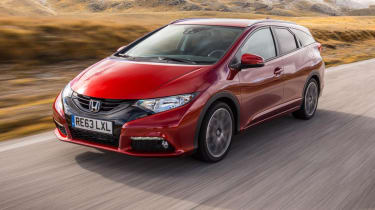 Prices have been announced for the new Honda Civic Tourer.

The distinctive estate version of the Civic offers boot space closer to a Ford Mondeo estate than the Focus it traditionally competes with, thanks to 624 litres of storage capacity with the seats up, rising to 1668 litres with the rear chairs flipped.

The Civic Tourer launches with two engines. Most sensible is a 118bhp/221lb ft 1.6-litre diesel engine. Dubbed the i-DTEC, it boasts impressive economy figures, with claimed 74.3mpg fuel consumption and a tax-dodging 99g/km of CO2 emissions. Its top speed is 129mph, while 0-60mph takes 10.5sec.

More exciting is the VTEC option, a 1.8-litre naturally aspirated petrol engine with 140bhp and 128lb ft of torque. Performance is improved, its top speed up to 134mph and 0-60 time dropping to 9.1sec. Fuel economy and CO2 emissions aren’t quite so hot, at a claimed 45.6mpg and 146g/km respectively, though its greater appetite for revs will appeal to those more interested in driving.

And if the Tourer is anything like its hatchback sibling, it ought to drive pretty tidily. On top of that, the estate Civic sees the debut of ADS (Adaptive Damper System), which adjusts the rear dampers depending on load and driving conditions, with the choice of Dynamic, Normal and Comfort modes.

Order books are open in December, with deliveries starting in February 2014. Prices for the new Civic Tourer start at £20,265 for an entry-level 1.8 VTEC. Honda’s 148bhp 2.2-litre i-DTEC diesel seems a shoo-in to appear further down the line, while we can live in hope the Ford Focus ST Estate gains a rival in the shape of a new Civic Type-R Tourer. That might be wishful thinking, though…