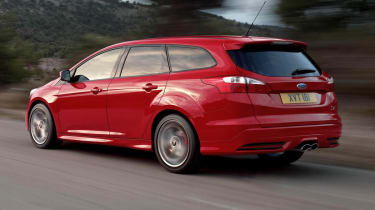 Over the hatchback, very little, other than an extra 400 litres of bootspace with the seats folded down (the estate offering up to 1502 litres of holdall area). It weighs an extra 24kg and measures nearly 200mm longer, but its wheelbase is identical to the five-door, as is its performance: the 6.5sec dash to 62mph and 154mph top speed are unchanged.

>Read: Ford Focus ST review Being a mk3 Focus, there’s a plethora of technology on the options list, not least lane departure warnings, blind-spot monitoring, voice-activated allsorts and traffic sign recognition. What’s it like to drive?

The minimal mechanical changes mean it’s as impressive as the Focus ST hatchbacks we’ve previously driven. Ford has managed to replace the old ST’s warbling five-cylinder 2.5-litre engine with a four-cylinder 2-litre that sounds nearly as interesting and delivers more power. You’re never in any doubt that it’s turbocharged, but the laggy, unnatural delivery of some rivals is missing and it’s a lovely engine to keep on the boil. A slick six-speed manual gearbox – there’s no automatic option – adds to the satisfaction. There’s more than enough torque to allow ample acceleration in all gears, and conversely some notable torque steer in second and third gears, especially on bumpier bits of British tarmac. It’s not a deal-breaker, but there’s enough to heighten your grasp of the steering wheel, especially if the ESP is off. ESP on or off, though, this is a great handling car. The variable-ratio electric steering is far more satisfying than you might suspect, and there’s a real sweetness to the car’s reactions. Grip is lost progressively and the rear is properly throttle-adjustable, and can be used to tighten cornering lines very effectively. The Focus ST is a fun, well-balanced car to drive and it’s unaffected by the extra length and weight of an estate body. Rivals

If you want an estate car with a proper performance badge, the ST is your only option sub-Audi RS4 Avant and Mercedes C63 AMG estate. The only rival that springs to mind is the Skoda Octavia vRS estate, which boasts a much bigger load bay and is cheaper at £21,480. But it’s 50bhp short of the Ford and while the Octavia’s good to drive, the Focus is more flamboyant. Economy and MPG

The switch to a four-cylinder engine has yielded an impressive 39.2mpg combined figure, but like its bigger-engined predecessor, the ST will quickly settle in the low 20s if you’re pushing on. A realistic average for mixed driving is 28mpg.