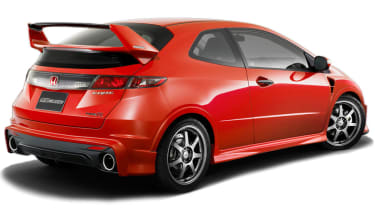 The first pictures of Honda’s Mugen-tuned Civic Type-R hot hatch have been released. We heard rumours of the more hardcore Honda a few weeks ago, and these official pictures back them up quite nicely.

While there’s still no specific details regarding mechanical tweaks, a tuned version of the stock hot hatch’s 2-litre VTEC petrol engine is set to boast 237bhp and 160lb ft of torque, respective rises of 39bhp and 18lb ft.

There’s set to be stiffened suspension while the upgraded Brembo brakes from the rather fantastic Mugen RR should hopefully be housed behind the new alloys. That’s a car we drove last year and were left hugely impressed by, and until the Renaultsport Megane R26.R came along it was the quickest front-driven car we’d tested around the Bedford Autodrome.

Renault’s hot hatch hero is the natural rival to Mugen’s Civic, and as a result expect the Type-R to boast a stripped-out interior and some trick trackday tyres. The tweaks are set to be offered in stages or all in one go, too, as well as retro-fit to existing Civic Type-Rs. Probably good news when you consider the projected £35,000+ price tag for a full-on Mugen Civic.

Click here to read our review of the Mugen RR and the Renaultsport Megane R26.R