The Mugen RR takes front-drive cars to a new level, and we’ve driven the only one in the UK 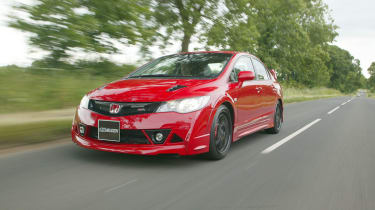 My first sight of the rarest and probably most desirable Honda Civic on the planet is a flash of blood-red paint and a glint of black wheel spokes a couple of hundred yards away. Even at this range I know it’s the real thing, and up close the Mugen RR is even more striking.

Its owner, Waqar Ahmed, hops out and we shake hands. The driver of the car that followed the Mugen into the lay-by has joined us on the pavement and I shake his hand too. I assume he’s a friend of Waqar’s. Waqar thinks he’s a friend of mine. Turns out he’s a stranger to both of us; he’s simply a Honda enthusiast who wants to know if the car is for sale!

‘It’s mental,’ says Waqar, who collected the car from import specialists Performance Centre Manchester just a few days ago. ‘Everywhere you stop you end up surrounded by people.’ That’s testimony to three things: the irresistible, ground-skimming stance of this limited edition Civic, the desirability of cars that marry the Honda and Mugen names, and the power of the internet.The Civic Mugen RR (be cool and say ‘double R’ rather than sounding like a pirate) went on sale in Japan last September and all 300 examples were snapped up in just ten minutes. This is the only example in the UK and is likely to remain so, as back home RRs are now changing hands at a premium, which is quite something, because while the standard Japanese-market Civic Type-R costs 2.8m yen, this Mugen was 4.8m yen.

That’s quite a hike – about £8K – for what appears, as first glance, to be a gentle massaging of the already impressive JDM Civic Type-R. The more you delve, however, the more thorough you discover the rework has been and the more plausible Mugen’s claim to have built the ultimate front-drive car becomes.

Mugen is well known for offering tuning and styling parts for Hondas, but everything on the RR is unique and will not be on sale separately. Take a chunk out of one of the 18in, seven-spoke forged alloy wheels and you’ll have to prove you own an RR to get another. Ditto the restyled front and rear bumper aprons, which are fashioned from carbonfibre, the vented bonnet in aluminium and the new rear spoiler, also carbon, with additional Gurney flap.

Despite such lightweight parts, to which you can add the carbonfibre-shelled Recaro bucket seats inside, Mugen claims the RR is just 10kg lighter than the cooking Type-R, demonstrating how lean that car already is. You won’t find a substantial power uplift either. In concept form, the RR was said to have a 256bhp, 2.2-litre version of the much-lauded K20A engine, but the production version sticks with the original 2 litres. Mind, with 237bhp it does produce more power than the stock 222bhp unit, thanks to new cams, a tailor-made 4-3-1 exhaust with high-flow catalysts, and a fat tail-pipe either side of the impressive rear diffuser.

Now, we’re big fans of the Japanese-market Civic Type-R, with its 9000rpm in-line four, limited-slip diff and road-legal grooved slicks. The Mugen sets out to be even more focused, but the cynical side of me imagines this being like the difference between a four-blade and a five-blade disposable razor, i.e. largely imagined. However, the Mugen is said to be measurably faster around the Tsukuba circuit in Japan so, with Waqar’s consent, we’re going to see if it can show the same on the West Circuit at the Bedford Autodrome.

First, though, we’re going to find out what the Mugen feels like on the road. Climbing into the lairy red-and-black interior I find the seat is a snug fit across the back even for me, and I’m pretty slim. Above the slot for the radio sits a trio of auxiliary dials, while down on the centre console is a small, simple, aluminium plate lightly embossed with the number 178.

Twist the key, push the red button and, as in the stock Type-R, the 16-valve in-line four fires and settles to an idle that’s light, smooth and rather timid. The short-throw Mugen shift feels wristily notchy and stroking along gently there’s still no hint that the engine has another side. Immediately attention-grabbing on these B-roads is the firmness of the ride. It feels a fraction stiffer than the already tough standard set-up and the RR looks lowered too, though that might be an effect of the lower-slung sills. Certainly it’s a resilient chassis, but while the ride is very tightly controlled it’s never crashy.

The steering is surprisingly light and tugs gently as the Bridgestone RE070s’ large tread-blocks find bumps and cambers, but instantly impressive is the feel of the brake pedal; Mugen has fitted its own grooved discs and braided hoses to the Brembo system and there’s instant, progressive power from the very top of the travel. It’s among the best I’ve ever felt.

Torque is thin down low but that suddenly seems of no consequence as the tacho needle swings through 6000rpm. The note gains weight, the shove in the back hardens to a punch and the whole car seems to pull into focus. Peak power is quoted at 8000rpm but this engine seems to deliver useful urge right up to the limiter, a gnat’s short of 9000rpm. As ever, it’s an engine you have to keep on the boil – it’s still odd to be tacking through a series of unsighted bends at a frantic 6500rpm in second, waiting to nail it when the road opens out.

There are, of course, no such problems at the Bedford Autodrome. I can’t detect much difference between the RR and the Type-R, except that the Mugen feels a bit stiffer, so I’m not expecting to see the Type-R’s 1:31.0 beaten. However, despite feeling a fraction less adjustable and as though its front end is dealing with just about as much power and torque as it can, it takes just a couple of laps for the RR to get down to that time.

The Mugen has only around 500 miles on the clock, but so did the regular Type-R we tested around the new West Circuit a couple of issues ago, so it’s all even. After a couple of laps to cool it down we go for it again and the RR pulls out a 1:29.3. Amazing. Analysing the traces of both cars, the Mugen attains fractionally higher speeds but gains most by carrying more speed into the fastest corners at the end of the lap.

Is the Mugen RR the ultimate front-drive car, then? On lap times, I suspect it has laid down a marker that will stand for a very long time, and making the Civic faster on track was one of Mugen’s objectives, so it’s job done, then. Personally, I prefer the feel of the slightly more compliant regular car on both road and track, but there’s no question, as an object of desire the Mugen RR is untouchable.

With thanks to Waqar Ahmed and Performance Centre Manchester.