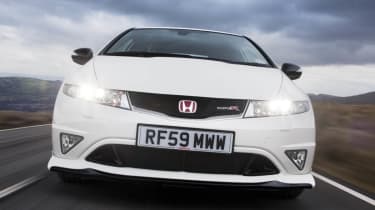 Honda’s announced a Civic Mugen for the masses. We’re big fans of the hardcore Honda (track test video here), but its 20-strong production run and £38K price hinder its success somewhat. This Civic-Type R Mugen 200 should remedy that. While the standard Type-R’s 198bhp 2-litre VTEC engine remains, there are aerodynamic and styling mods similar to those of the full-strength Mugen, including tweaked bumpers and skirts, 19in ‘Lightning’ alloys and the obligatory Championship White paint scheme. The Mugen 200 also benefits from the fitment of a limited-slip differential. It’s the same one that transformed the Type-R White edition we ran on our long-term fleet, that car now effectively off sale. Dynamic and performance tweaks will be available for the Civic Type-R as dealer fit options, too, allowing elements of the Mugen Civic experience for (fortunately) a fraction of the price. There’ll be 200 Mugen 200s made (see what they did there?), the order books opening in March. Its sales will coincide nicely with its appearance in the BTCC, two Mugen-alike Civics making up the Team Dynamics line-up for 2010.  View evo’s Civic Type-R, Champ White and Mugen comparison Read how we got on with our Championship White long-termer evo’s Adam Shorrock blogs on living with the Honda Civic Mugen Follow evo on Twitter and Facebook for the latest car news and views