Quirky hatch gets warmer, but it’s not yet hot 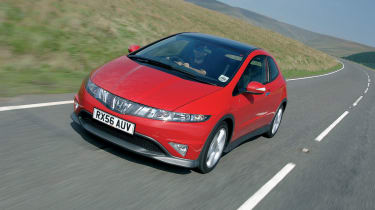 In the alphabet, R comes before S. In the world of three-door Honda Civics, it’s the other way round. The Type-R arrives later, but for now there’s a taster in the form of the Type-S, with the same new body-shape clothing a slightly wider (by 20mm) rear track.

The engines are existing Civic fare, which means a 1.8-litre with 138bhp and variable timing and lift for its single camshaft, or a hefty 2.2-litre turbodiesel with the same power but nearly twice the torque (251lb ft to the petrol’s 128).

Deeper sills and valances, 17in wheels and part-Alcantara trim with – yes! – silver stitching set the tone, and there’s an optional GT pack containing lots of stuff you won’t miss such as cruise control and automatic wipers and lights.

There are some suspension tweaks, too – the springs and anti-roll bars are stiffer, as are the dampers’ rebound settings, and the ride height is fractionally lower – and the steering is weightier as it moves off centre, the steering column is mounted more rigidly, the stability system allows more freedom, and the wider rear track is designed to make the Civic less twitchy.

Does it all work? I drove the 1.8 i-VTEC Type-S and found a much improved car over the first new-shape Civics, with less thump from its rear suspension over ridges and a keener throttle response. The 1.8 is brisk rather than quick, though, so you need to use all six gears freely. And while the steering is credibly meaty, it’s short of true feel unless you’re cornering hard.

Which is something the Type-S does with glee. It feels precise and grippy, and hangs on to its line with enough easily-metered mobility from the tail to make every roundabout a dynamic treat. Now all the space age Civic needs is some warp drive, coming soon.