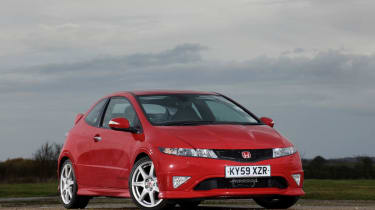 We’ve tried supercharged Honda Civic engines before, but they’ve always been attached to skeletal Ariel Atoms. This one is in more normal hatchback surroundings. It has a Rotrex supercharger putting out 0.7bar of boost at 8000rpm, while in the nose of the car the standard radiator has been replaced with a combination of front-mounted intercooler on the left third and a high-performance radiator on the right two-thirds.

The first thing that strikes me is how normal, un-shrieky and tractable the engine is. Given that, according to TTS Performance, the supercharger boosts power by 70 per cent and torque by 60 per cent over the standard car, the initial impression isn’t quite as fizzing as you’d expect. The ramp up is as smooth as with the naturally aspirated engine, just more vigorous. And although there is no longer a VTEC kick as you trip into the upper reaches of the rev-range, the engine undoubtedly crescendos to the red line, getting hungrier and increasingly powerful the longer you hold each gear.

Overall the TTS Type-R has a very classy feel to it, and it’s certainly quick, if not quite 337bhp quick. Avonvale Honda is currently offering the modifications as a showroom upgrade, which backs up the feeling that it is a high-quality conversion, although at over £5000, so does the price. Combine the ’charger with TTS’s brake upgrade, LSD and KW suspension set-up and it could make an interesting alternative to a Mugen…