Honda Civic review - does the Type R’s class translate lower down the range? - Performance and 0-60

The Honda Civic’s engine range may lack the complexity of rivals from VW or Ford, but at its core is well judged and easy to choose between. The entry-level 1-litre triple is brisk enough, reaching 62mph in 10.8sec, making it slow without being dangerously so. The 1.5 is more effective, hitting 62mph in 8.2sec. The diesel also fails to duck below the 10 second mark to 62mph, taking 10.2sec.

Unlike Honda engines of old, the turbocharged range gives the Civic effortless torque in the mid-range, making the screaming VTEC engines Honda is known for a thing of the past. Although we miss those revvy, delicate engines, the extra torque on offer does make it a more relaxing car to drive on the move, negating the need to constantly change gear to find performance.

The diesel is refined enough at lower speeds, but up the pace and its compression ignition makes itself known. The CVT is among the better of its type we’ve tried; high-rev mooing under hard acceleration hasn’t been completely banished but it’s also not overly intrusive (and with the gravelly three-pot, not unpleasant, either), and switching to the stepped-ratio ‘manual’ mode you do get an extra degree of control.

This being a Honda, though, the manual is the much more satisfying option. The shift is slick and precise, with a short throw. The 1-litre and manual combination is actually the sweetest, we reckon, since the four-cylinder 1.5 delivers a raucous, tuneless (and most un-Honda) racket under acceleration. Our test cars felt a little tight, but the 1.5 definitely offers a performance advantage over the 1-litre, which sometimes feels like it needs a gear between a short second and long third on twisty roads. 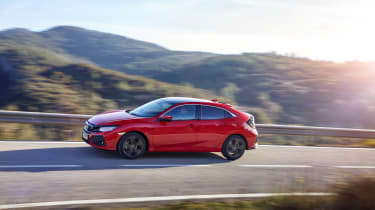